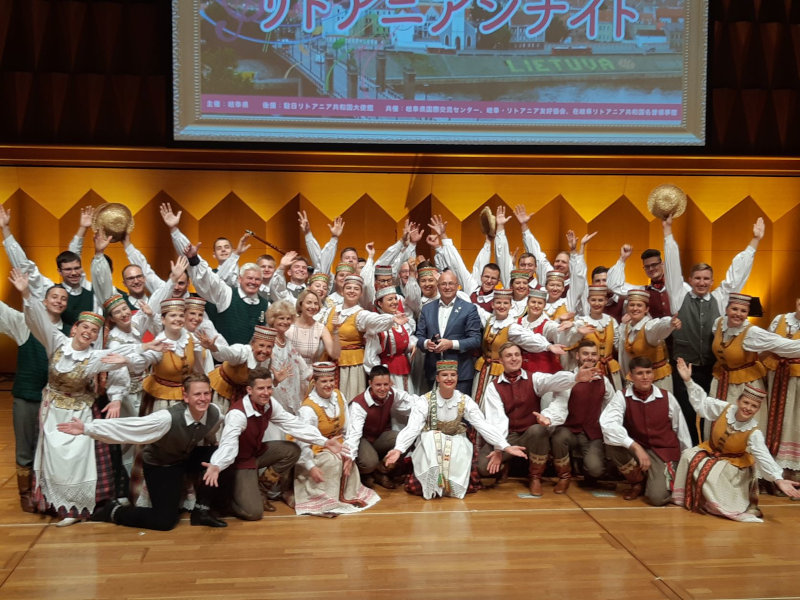 "Dora" Theater in Tokyo and its producer Kazumi Sakabe were the main initiators and the most important actors in fostering Japanese-Lithuanian theatrical relations. Kazumi Sakabe visited Lithuania in 1993 for the first time. This theater fostered the collaboration and exchanges of directors and actors from both countries.

"Dora" theater started up in 1992 with a "Sempo Sugihara" performance. Subsequently, the troupe invited Lithuanian director Ignas Jonynas for theatrical training. Later, in 2005, together with Dora's actors, J. Vaitkus staged the play "Sakura in the Storm (Lit. Sakura Vėtroje)." 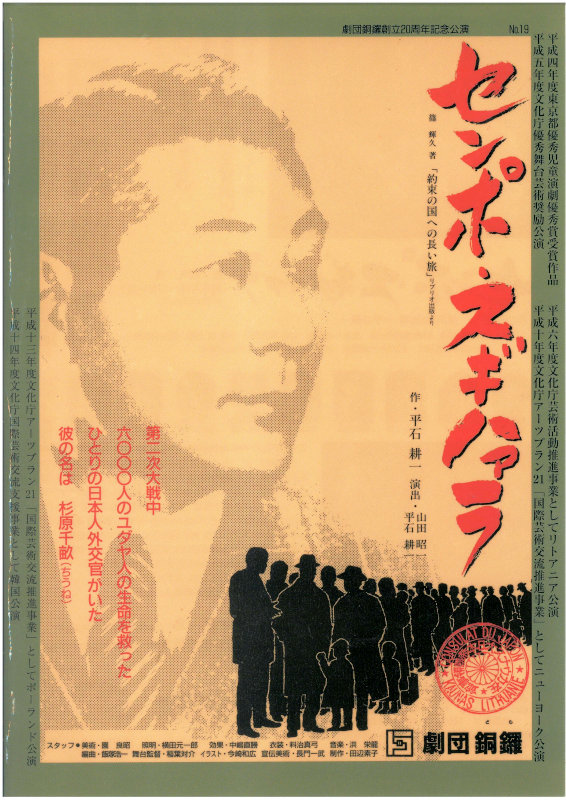 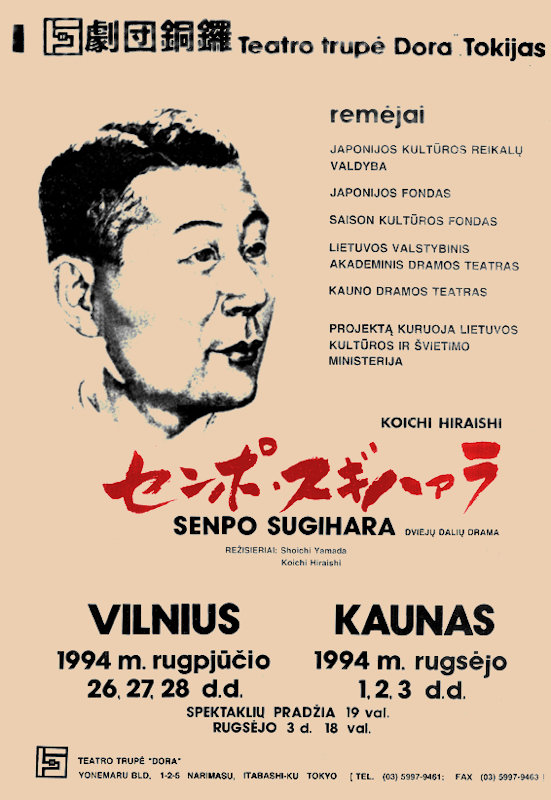 Staged in 1992, "Sempo Sugihara" is the first performance of the Dora Theater depicting a Lithuanian theme - Ch. Sugihara's feat. Its premiere took place at RN Hall in Tokyo and was later shown more than 350 times in various locations in both Japan and Lithuania. This performance contributed to the rise of the Ch. Sugihara's profile.

Sakura in the storm

When the producer K. Sakabe and the director of the "DORA" theater Tanabe heard about the friendship of the Lithuanian and Japanese women in a post-war camp, she came up with the idea to stage a performance "Sakura in the Storm" (Lit. "Sakura Vėtroje"). Although the plot is fictional, it's based on real events. The performance is full of music, stage movement, and impressive images. It intertwines seemingly different but, at the same time, strangely close Japanese and Lithuanian cultures, which intersects in unexpected and colorful ways.

In the performance, the Japanese and Lithuanians seem to discover mythology – be it a Mardi Gras ritual, a tea ceremony with aluminum prison cups, or a samurai dance with fans. The action is accompanied by a musical background of the Japanese song and Lithuanian psalm.

The play premiered in April 2004 at the Haiyuza Theater in Tokyo. In the autumn of 2005, the performance reached the viewers of Vilnius, Kaunas, and Klaipėda. 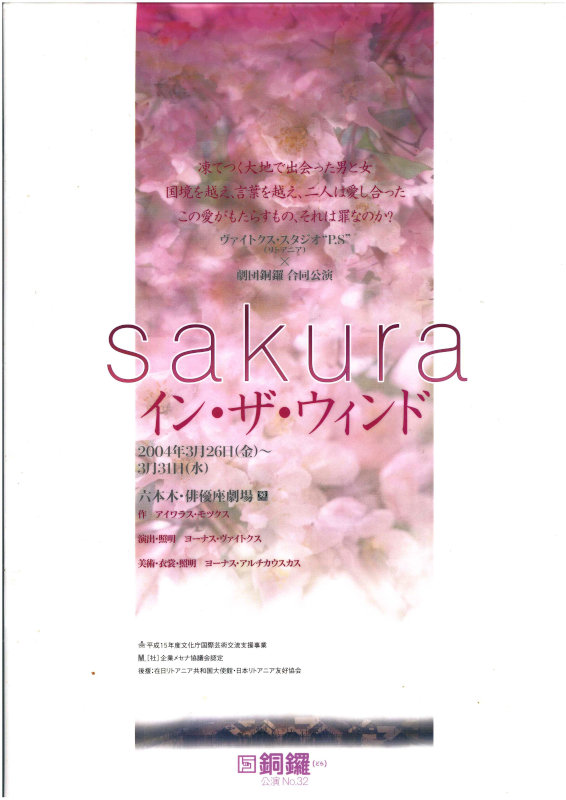 The acquaintance of Lithuanian spectators with Japanese theater is very diverse. During the three decades of independence, it was possible to get acquainted with the traditional Japanese theater forms, such as kabuki, no, or kiogen. Lithuanian directors like Japanese scenes, and Yukio Mishima is among the most popular Japanese playwrights. 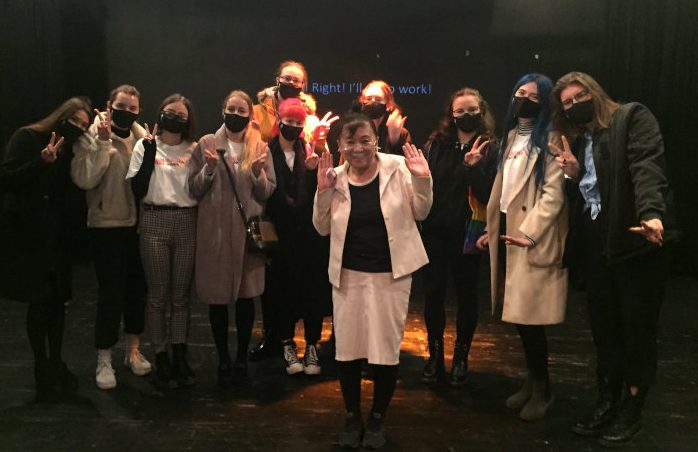 The first acquaintance of Lithuanian spectators with traditional Japanese theater was in the autumn of 1999 when the "Kishokai" theater troupe arrived in Vilnius. It showed two performances - "Mrs. Aoi" (Lit. "Ponia Aoi" and "Angel's Feather Cloak" (Lit. "Angelo plunksnų apsiaustas") with a comic kyogen insertion "Thunder" (Lit. "Griaustinis"). Later, the Lithuanian audience had the opportunity to get acquainted with the theatrical tradition of Kabuki. 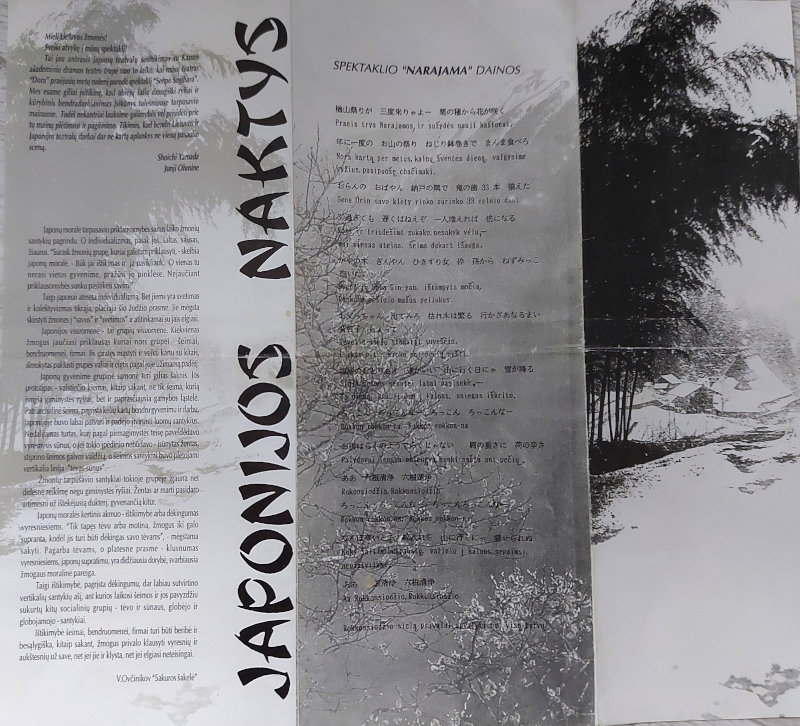 Japanese theater reached Lithuania through the works of Japanese playwrights. One of the first such attempts was the comedy of Ken Miyamat's "Exile the Old Women," which was staged at the Kaunas State Academic Drama Theater, and Shichiro Fukazawa's drama "Narayama." The same Dora Theater from Japan was the inspiration for these performances. The premiere was called "Japan Night" and took place on the 18-19th of 1995.

Yukio Mishima is one of the most favorable Japanese authors among Lithuanian directors, whose plays and prose works were staged by Jonas Vaitkus (Marquis de Sad in 1993), Cezaris Graužinis (Lady Chan (Lit. "Markizė de Sad") in 1994), Eglė Mikulionytė (Golden Temple (Lit. "Auksinė šventykla") in 2011), etc. Gabija Čepulionytė is actively translating the plays of this author into Lithuanian.

The performance is based on a play by Japanese playwright Seiichi Yashiro and tells the 18th-century love story of the Japanese Zen Buddhist monk Ryokan and geisha. The staging was directed by Kęstutis Marčiulynas.

The premiere took place in February 1996, tours were held in Lithuania and Japan. The staging received much positive feedback and international awards, including the UNESCO Uchimura Prize. 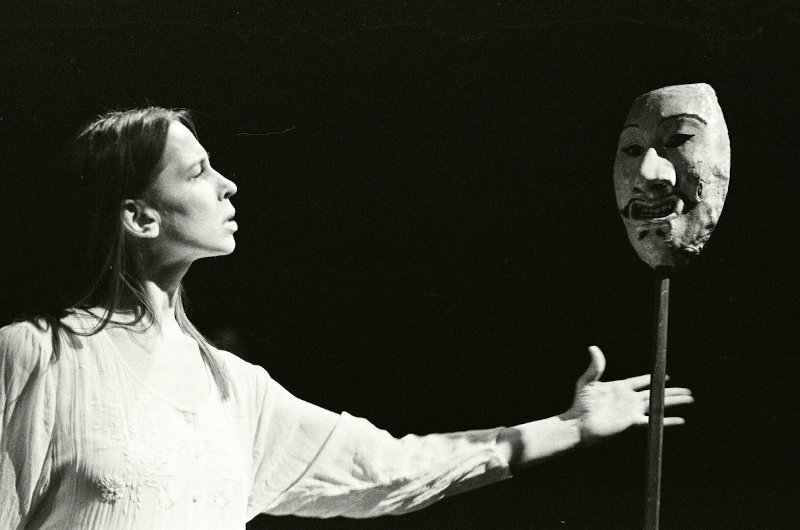 The play is based on the Japanese writer, Yukio Mishima, work "The Golden Temple." It represents true events of the 1950s when a Zen Buddhist monk burned a masterpiece of Kyoto architecture, the Seven-Century Golden Temple. The interpretation of the monk's personality inspired the Lithuanian actor K. Marčiulynas, a monk in a Korean Zen monastery since 2001. The premiere of the performance took place in Alytus on the 15th of May, 2018. Later it was shown in Kaunas and Vilnius. 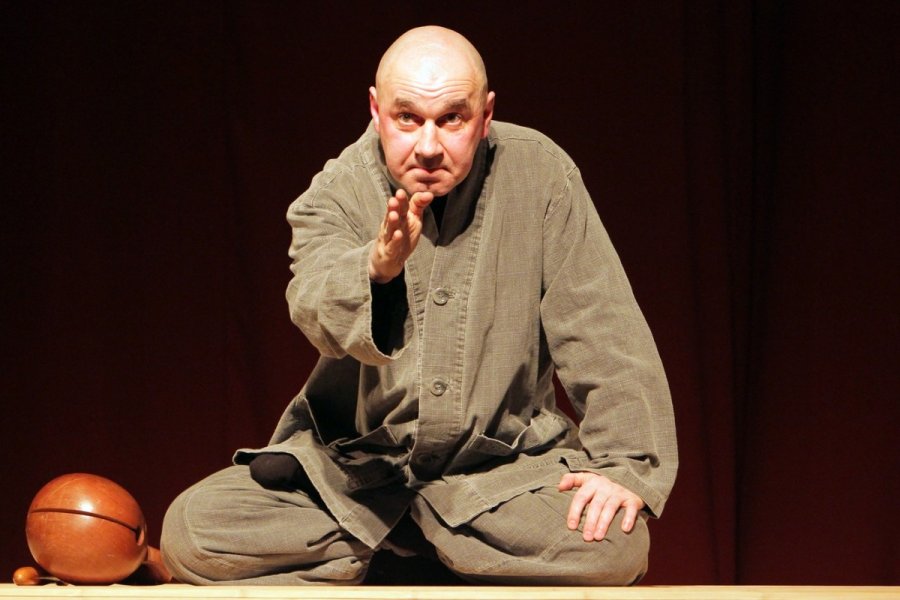 (K. Marčiulynas during the performance)

Buddha in the Attic 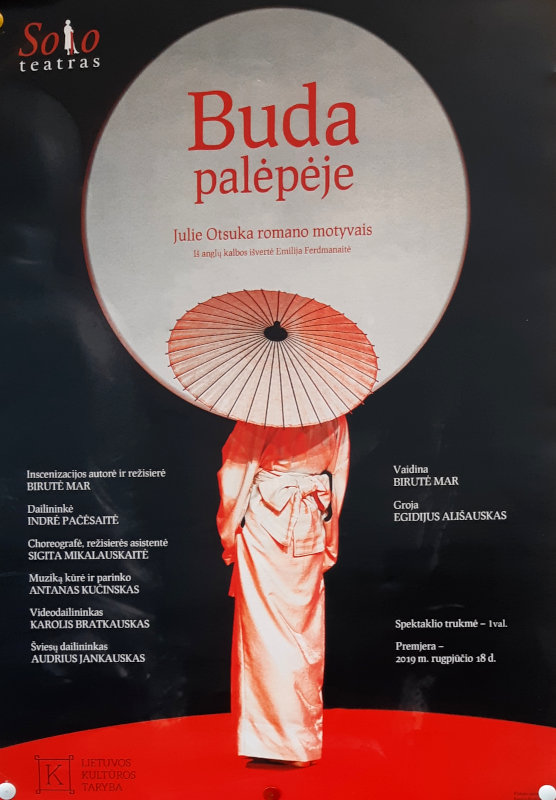 Created by Japanese-American writer Julie Otsuka, the performance is based on a novel that depicts the true stories and fates of the 20th century Japanese emigrants. The creator and director of the play, Birutė Mar, studied traditional Japanese theater, which is also adapted in this performance. The premiere took place on the 11th of September 2019 in Catherine's Church.

Music is one of the international languages, which is easily understood by all nations. Various musical forms actively participate in the development of cultural exchanges between Japan and Lithuania. Until now, both countries got each other acquainted with classical, traditional, and pop music.

The Lithuanian State Symphony, Lithuanian Chamber Orchestra, the National Opera and Ballet Theater Troupe, including performers from individual municipalities, universities, and schools, gave concerts in Japan many times. The talent and quality of Lithuanian performers impress the Japanese audience every time. Such concerts are also an opportunity for Lithuania to present its composers, such as Čiurlionis, B. Dvarionas, and others.

Works by Japanese composers are also performed in Lithuania. For example, in 1999, Petras Geniušas and Raimundas Katilius prepared a musical program for contemporary Japanese composers. It featured works by Toru Takemitsu, Joji Yuasa, Takashi Yoshimatsu, Shinichiro Ikebe, and other composers. 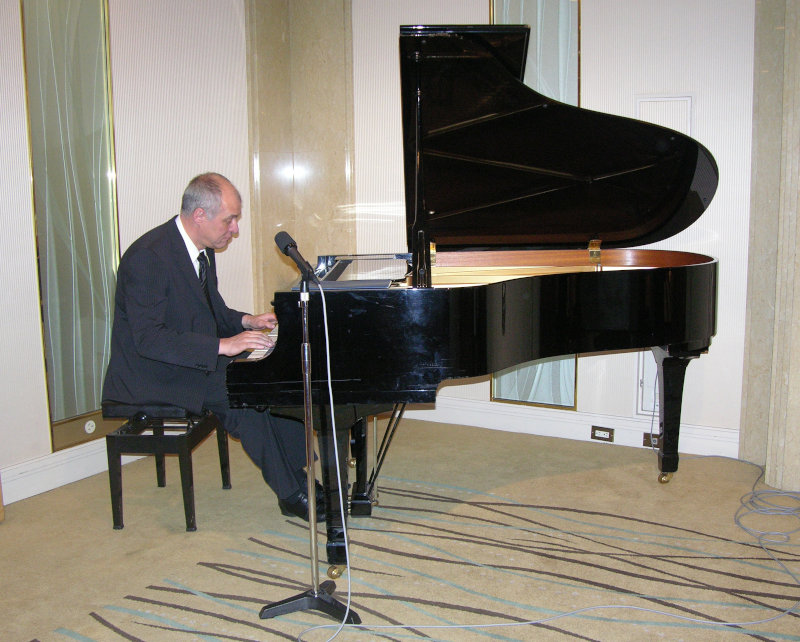 Choirs are one of the most popular forms of musical exchange between the two countries. Lithuanian youth choirs "Varpelis," "Virgo," "Viva Voce," and many others have given concerts in Japan. Japanese choirs, including the Gifu Vienna Choir, frequently come to Lithuania as well. In 2018, the Japanese men's choir Jordan-kai even participated in the Lithuanian Song Festival with a repertoire of Lithuanian songs.

Choirs frequently come to Japanese-Lithuanian charity concerts, organized almost annually by the Japan-Lithuania Friendship Association (JALFA) since 2002. These concerts aim to support Lithuanian children with oncological diseases and tsunami victims in Japan. Japanese artists participate in these events at their own expense.

Because of many Japanese-cultural events arranged in the country, the Lithuanian audience is familiar with the traditional Japanese instruments, such as the string koto and shamisen, the wind shakuhachi, the Japanese flute, and the three-string Sanshin. The wadaiko concerts of Japanese drums are exceptionally popular and, therefore, frequently organized. Some Lithuanian musicians, admired by the traditional music of this country, learned to play some of the traditional instruments, for instance, Gediminas Sederevičius plays shakuhachi. 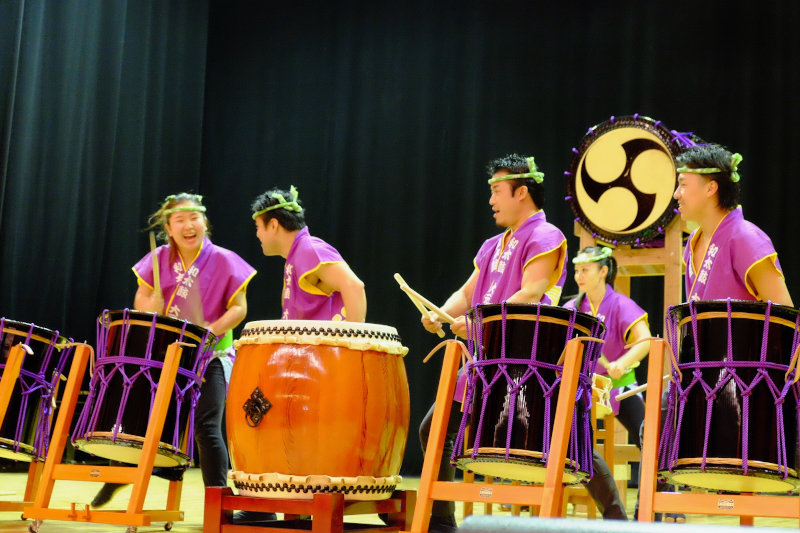 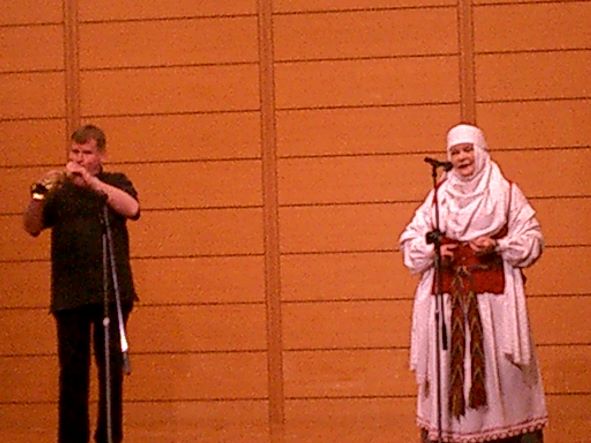 The theme of Sugihara in music

Chiune Sugihara's feat unites Lithuania with Japan and is presented through theater performances, books, and movies. In addition, musical pieces also reflect the story. One of the most notable of such works is the Japanese opera "Sempo Sugihara. Sakura of Hope" (Lit. "Sempo Sugihara. Vilties sakuros"), which premiered at the National Drama Theater in Vilnius in 2015. The musical "Sempo. The Legend of Sugihara, the Shindler of Japan" (Lit. "Sempo. Japonijos Šindlerio Čiunės Sugiharos legenda"), premiered in Tokyo in 2008, is a musical also dedicated to the Sugihara‘s feat. On the 5th of January 2014, another premier, the oratorio "Memories of Sakura" (Lit. "Sakurų prisiminimai"), took place at Kaunas Academic Drama Theater. This piece was created by joint forces, directed by S. Ikoh, composed by A. Gondai, and the libretto author R. Stankevičius. It was performed by Lithuanian and Japanese soloists and musicians. 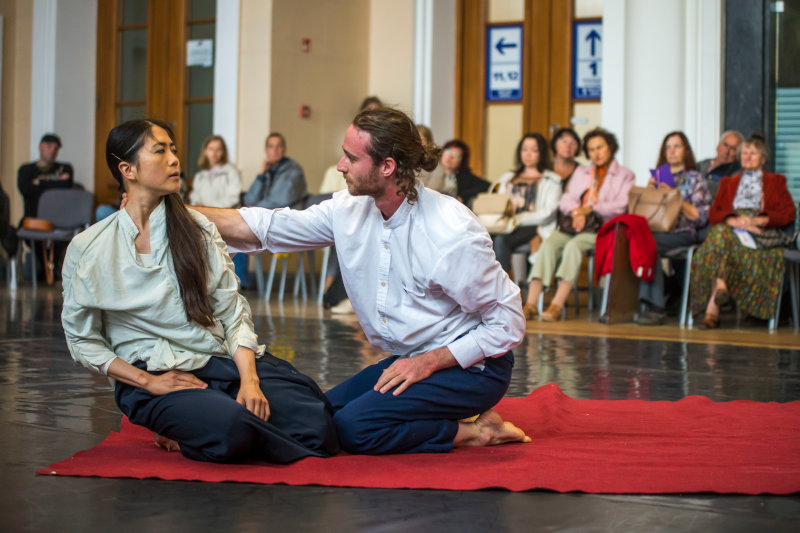 The Japanese art of dance also found its way to Lithuania. Lithuanian spectators had the opportunity to experience both traditional and modern dance culture. The Japanese dance tradition comes through dancers of Japanese origin who join local dancer troupes. Kyrie Oda and Natsuko Ibamoto, who danced at Kaunas Dance Theater "Aura," are among them. Ballerina Miki Hamanaka earned fame in Lithuania and danced at the Vilnius Opera and Ballet Theater for a long time. The representatives of modern dance participated in the international "Aura" dance festivals many times.

Tokijyo Hanasaki presented the culture of Japanese traditional dance in Lithuania many times and organized the Jiutamai dance performances in Vilnius and Kaunas.

In 2017, Lithuanians also had the opportunity to observe a rare Japanese theatrical form - the ritual dance kagura. It is a dance performed in Shinto prayers and accompanied by ancient musical instruments. The dance has a tradition of more than a thousand years. However, only the most significant Japanese prayers have preserved those traditions. In June 2017, priests from the Hachimangu Prayer in Kamakura visited Lithuania. They demonstrated kagura in Vilnius, Sudar, and in the Japanese garden in the Kretinga district. 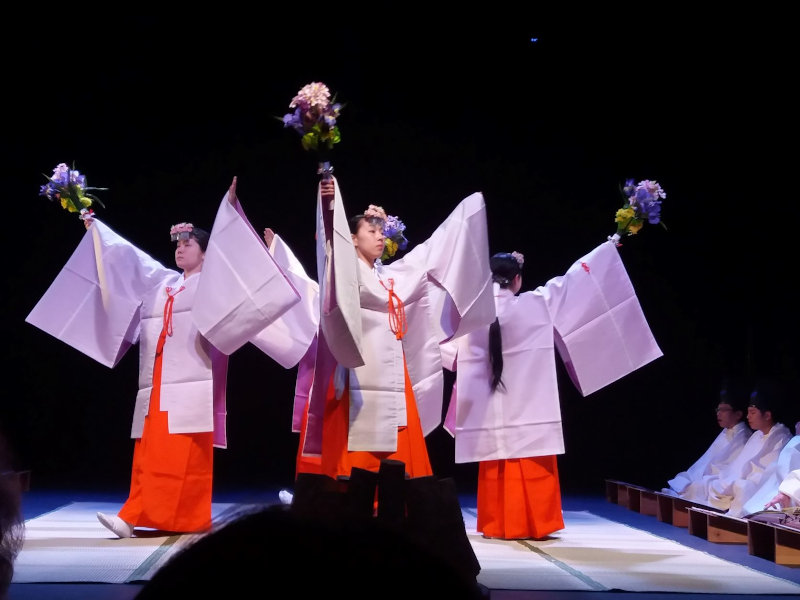 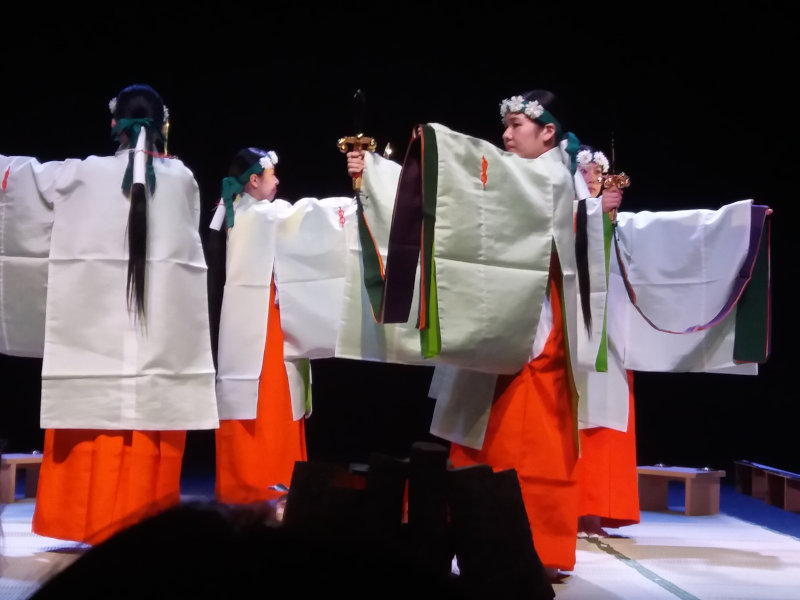 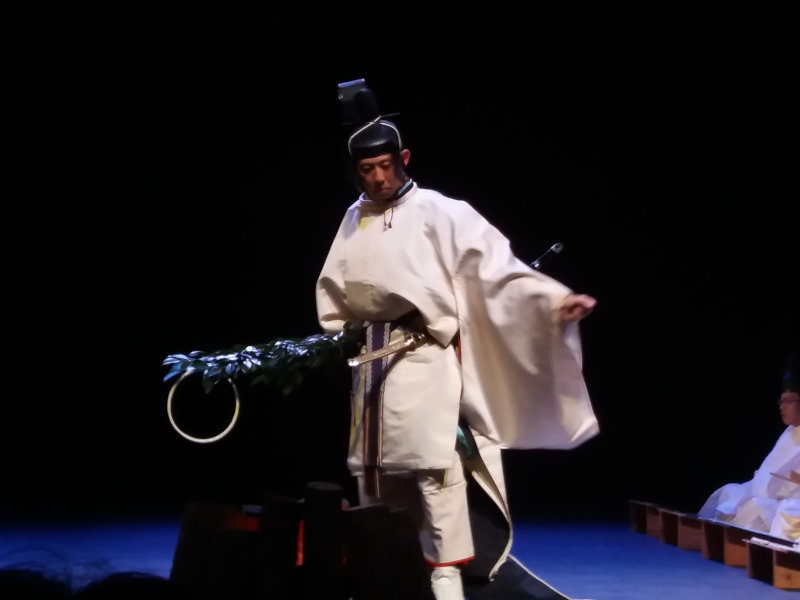 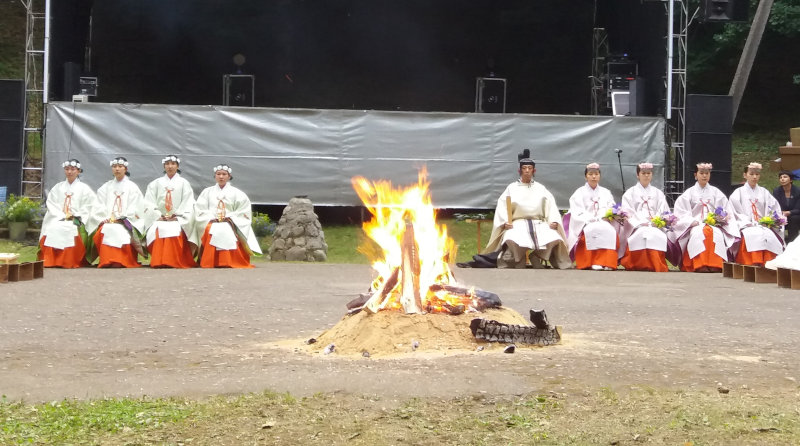 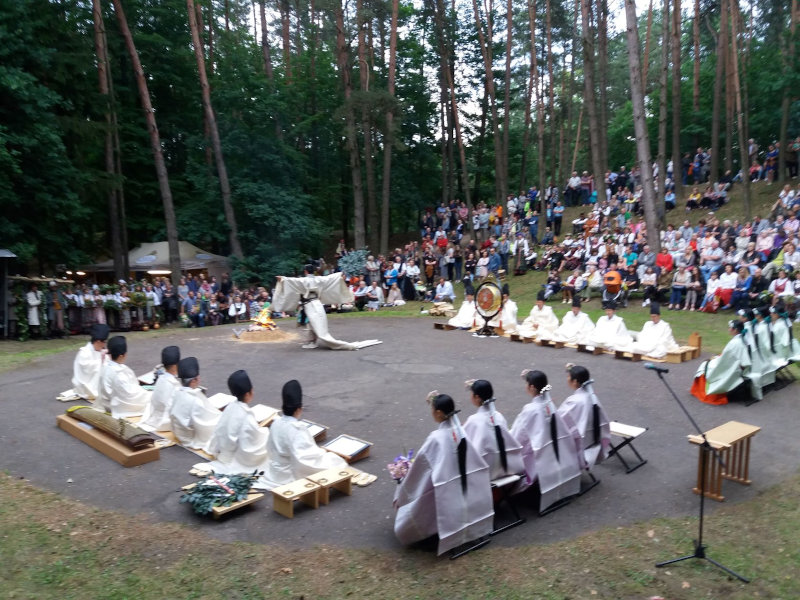 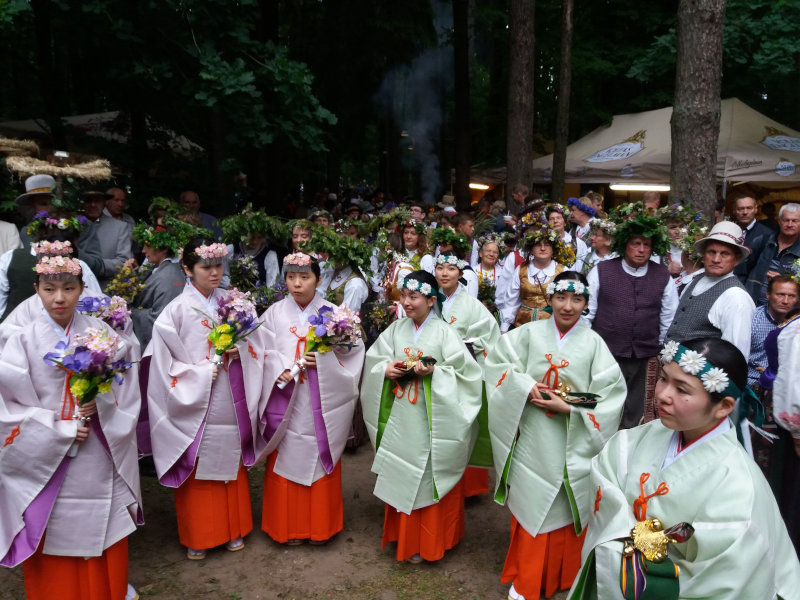 Lithuanians are very interested in contemporary Japanese dance Butoh, which combines the elements of traditional and modern dance. In October 1998, the Sankaijuku troupe toured Vilnius with the philosophical dance "Unetsu." It was performed at the Opera and Ballet Theater and fascinated the Lithuanian audience.

Some Lithuanian dancers attempt to use the elements of the Butoh dance in their performances. Sakurako-san, Sandra Bernotaitė, and others are especially keen on using them.