From diplomatic acknowledgment to Sugihara's feat in Kaunas 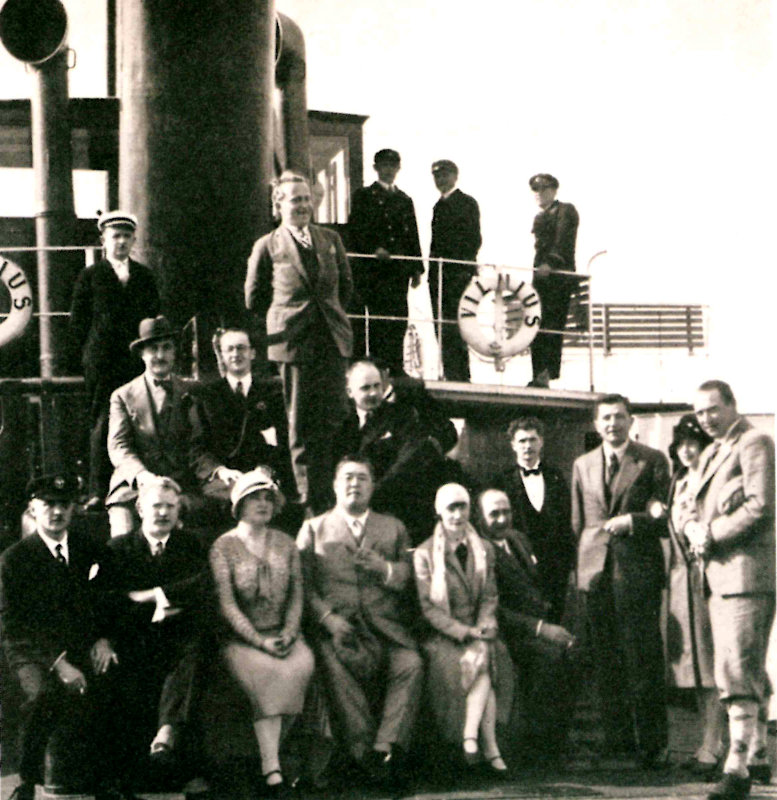 The conditions for Lithuania and Japan to initiate bilateral relations arose only in the 1920s. They were primarily predetermined by the proclamation of Lithuania's independence in 1918 after which Lithuania was seeking international recognition. At the same time, Japan also showed incentive to expand international relations and influence.

Because of the geographical distance, the cooperation between Lithuania and Japan was not particularly close or active in the interwar period. Nevertheless, the ties between the two countries was an interesting example of diplomatic relationship, which later laid a good foundation for modern bilateral Lithuania-Japan interaction. 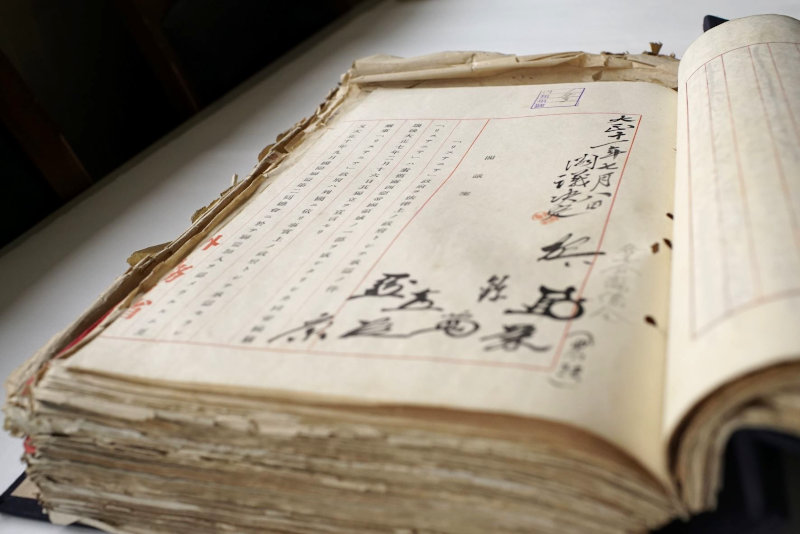 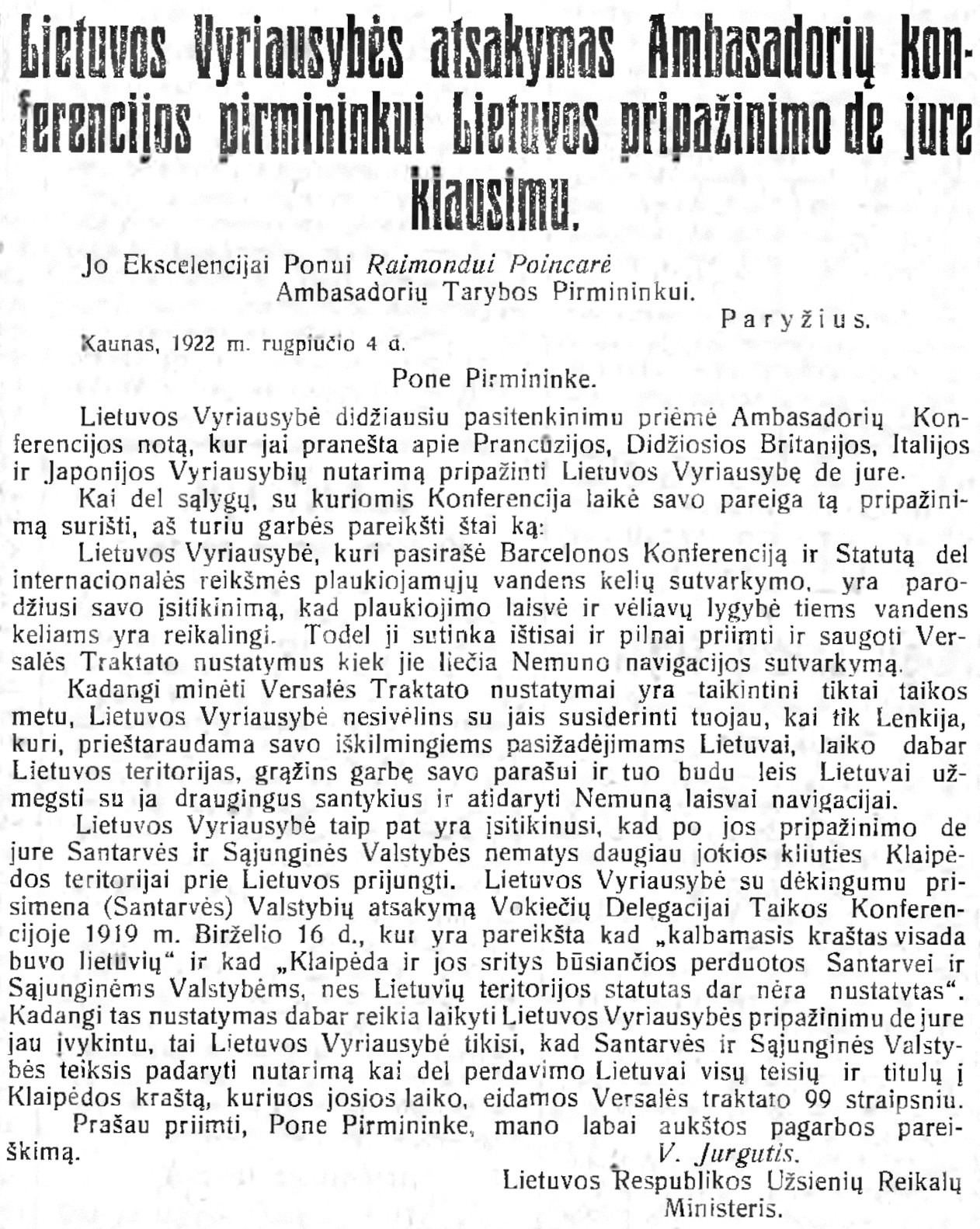 After de facto recognition, Lithuania actively sought de jure approval from the great states. In the case of Japan, Tomas Naruševičius was delegated to address this issue. At the time, he was a Lithuanian trustee residing in London and familiar with the peculiarities of Japan. On the 6th of December 1921, he prepared a letter for de jure recognition and handed it over for Japan's consideration during a meeting with Ambassador Gonsuke Hayashi. The result was not immediate – Lithuania's request was implemented by the Japanese government a year later, on the 20th of December 1922.

Negotiating the appointment of representatives

Further steps in building deeper bilateral relations were proposed by Lithuania, more precisely, the Ambassador to Finland Jurgis Savickis who initiated a meeting with the Japanese Ambassador Ryotaro Hata residing in Sweden at the time. They discussed the possibility of accrediting Hioji Nihei, the representative of Japan residing in Helsinki, as the Commissioner for Affairs of Lithuania. This plan, however, was never realized. 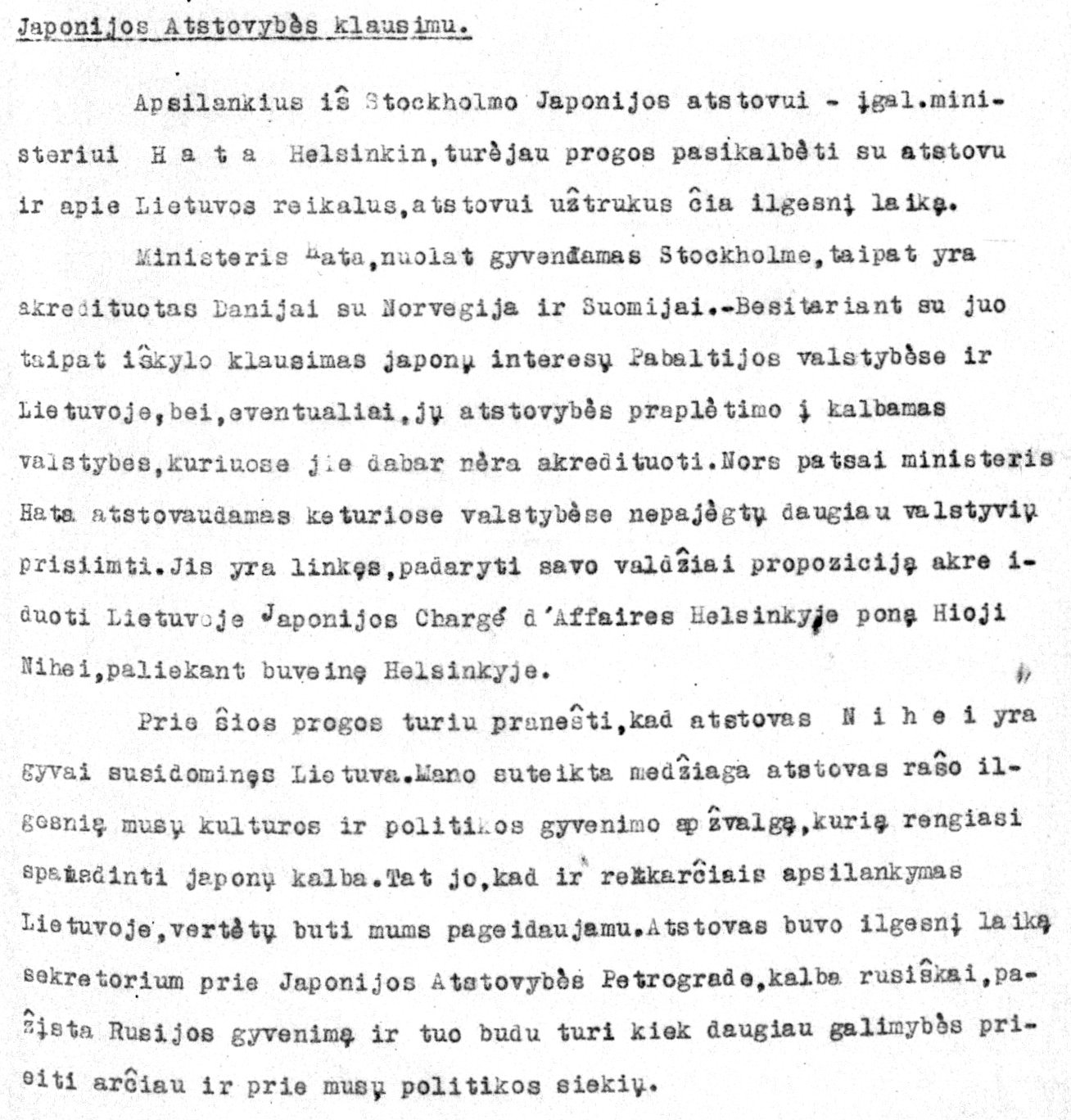 The issue of Klaipėda 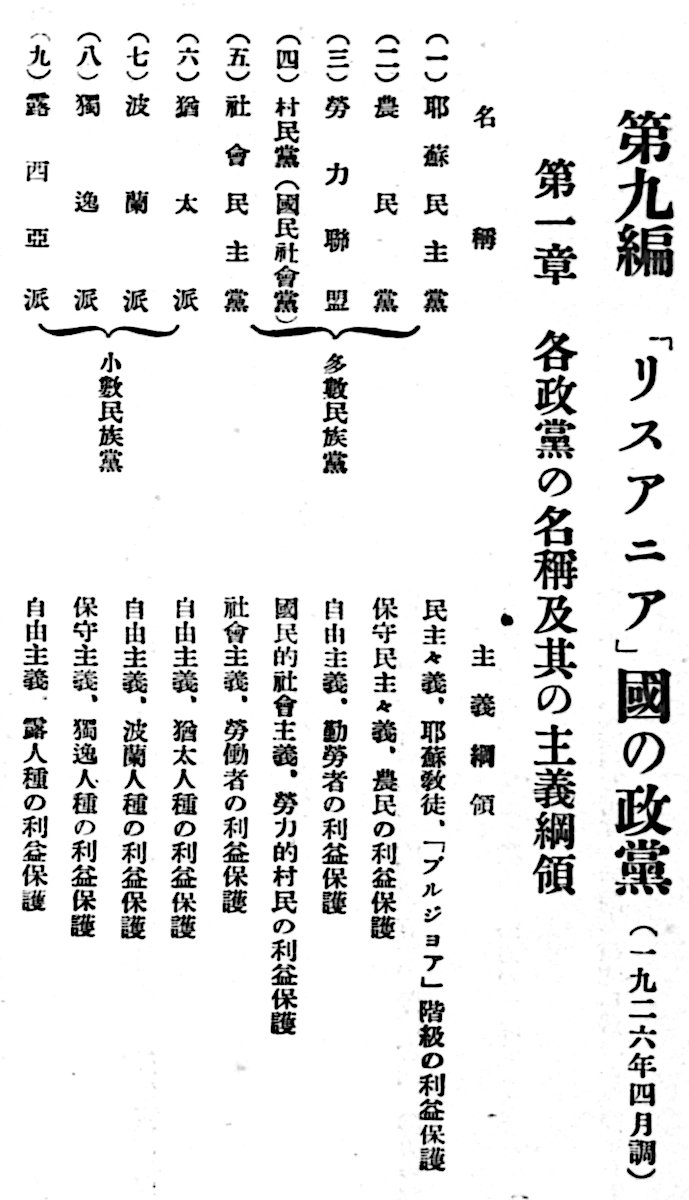 In 1924, in the spring, the representatives of Japan participated in the resolution regarding the Klaipėda region, as the consideration of this issue was handed over to the Conference of Ambassadors. This fact encouraged Japan to take an interest in Lithuania's geopolitical situation and relations with neighboring countries. For example, the Japanese Ministry of Foreign Affairs published a number of articles on issues of Klaipėda and Vilnius, as well as Lithuania's relations with Germany, Poland, Russia. Besides, the growing interest in Lithuania's geography, economy, and internal policies is also noticeable.

During the interwar period, Lithuania and Japan signed two bilateral agreements: the establishment of visa-free regime and the Trade and Maritime Treaty. These agreements allowed for more open and freer economic cooperation, which, due to geographical distance and international tensions, developed rather slowly and, unfortunately, did not grow into a larger-scale exchanges. In addition to these two agreements, both parties were also involved in wider negotiations to improve connectivity.

Visa-free regime and the Trade and Maritime Treaty

In February 1929, Lithuania and Japan signed an agreement of a visa-free regime, which ensured a more free movement of people. A year later (May 2, 1930), a close bilateral relation was strengthened by another document, the Trade and Maritime Agreement. It committed the parties to ensure the free movement of each other's citizens, to grant them the right of long-term residence, to trade, to acquire property, and to enjoy the same opportunities as the locals. The parties also committed to opening ports to ships, applying fair customs duties, allowing the establishment of consulates in each other's territory, and appointing official representatives.

At the same time, Lithuania was involved in the debate of another ambitious agreement – multilateral negotiations on the transportation of goods by rail between Europe and Asia. The delegates of the Baltic States, the USSR, China, Japan, and other countries were participating in the negotiations that lasted for almost four years, with meetings being held in various cities.

The final agreement was reached in the summer of 1931 in Tokyo. During the signing ceremony, Lithuania was represented by Jonas Augustaitis from the Ministry of Transport and Communications, a specialist well versed in railways. An interesting detail is that a year later (from the 1st of December until 17th, 1932) an additional conference to amend this agreement was held in Kaunas, where the representatives of Japan were also participating. It ended up with a protocol supplementing the agreement.

Main cities that were involved in negotiating railway connectivity:

Although the mentioned agreements contributed to the trade between Lithuania and Japan, the economic relations did not grow to a large scale. There are several examples of Japanese products in Lithuania and the export of Lithuanian products to Japan, such as Lithuanian butter, the products of the Klaipėda-based fertilizer factory Union, and others. Proactive mutual interest and efforts to expand trade relations are noticeable, but historical circumstances, such as the military conflicts in the East, were not conducive for the development. 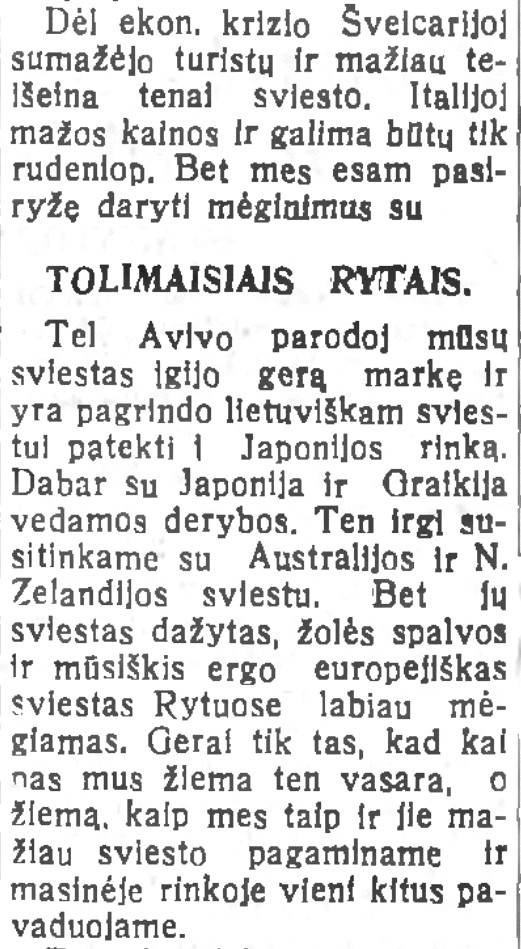 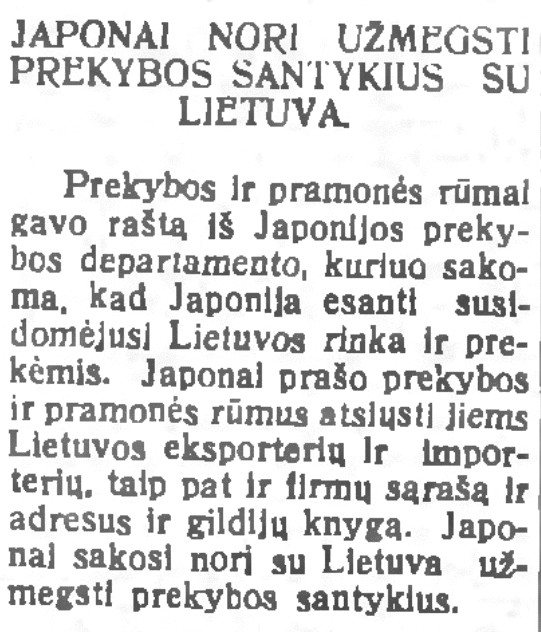 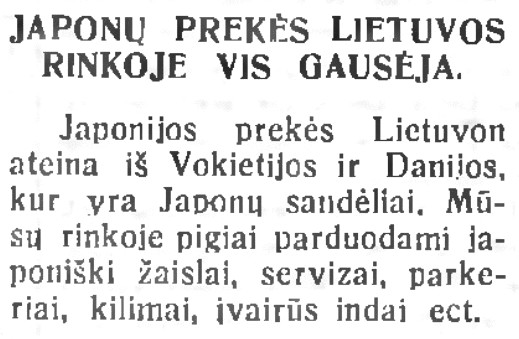 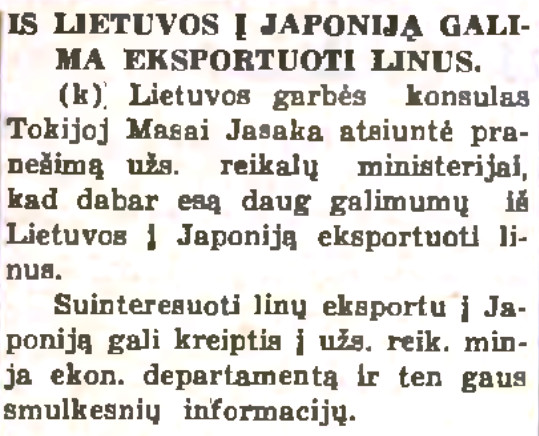 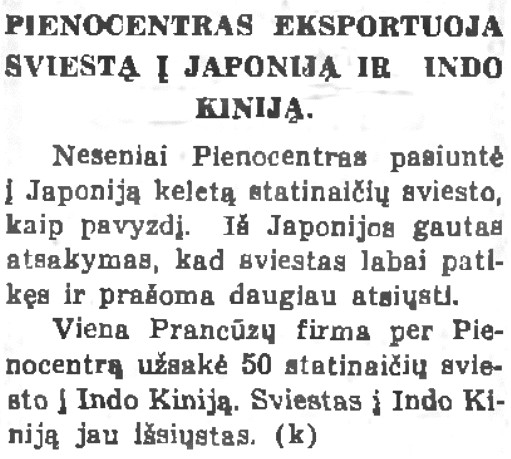 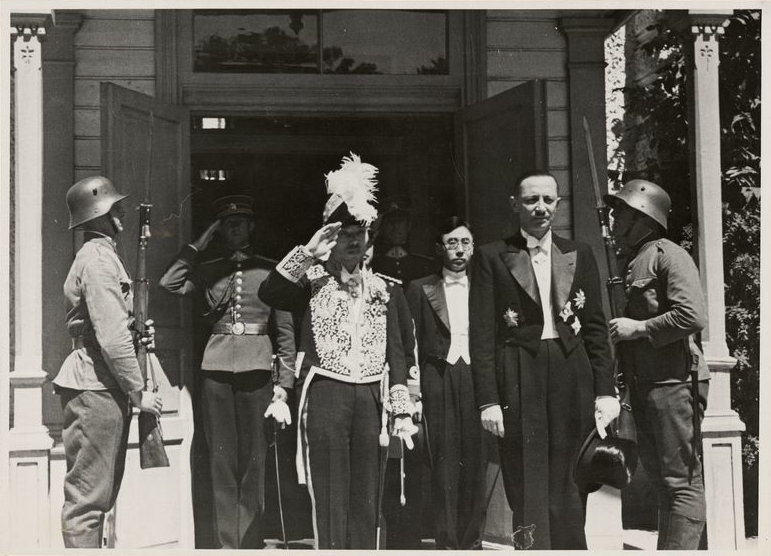 The Trade and Maritime Agreement created conditions for the appointment of representatives, and Lithuania was the first to take advantage of the possibility. On the 15th of May 1935, a businessman Masaji Yasaka, who managed the trading company Yasaka Shoji Kaisha, was confirmed as the Lithuania's honorary consul in Tokyo.

Despite the existing agreement with Japan, which allowed the establishment of the Consulate of Japan in Kaunas in 1939, historical circumstances prevented Lithuania from establishing its representative office in Tokyo. Furthermore, the 1930s was full of political tensions; therefore, the higher-level state visits were also difficult to implement.

Japan did not have a direct representative in Lithuania until the eve of World War II, as the consulate was opened in Kaunas in the August of 1939. Chiune Sugihara became the first and only consul of that period. Until then, the representatives of the Japanese embassy, who followed the situation in all three Baltic States and had been in contact with Lithuania, resided in Riga. 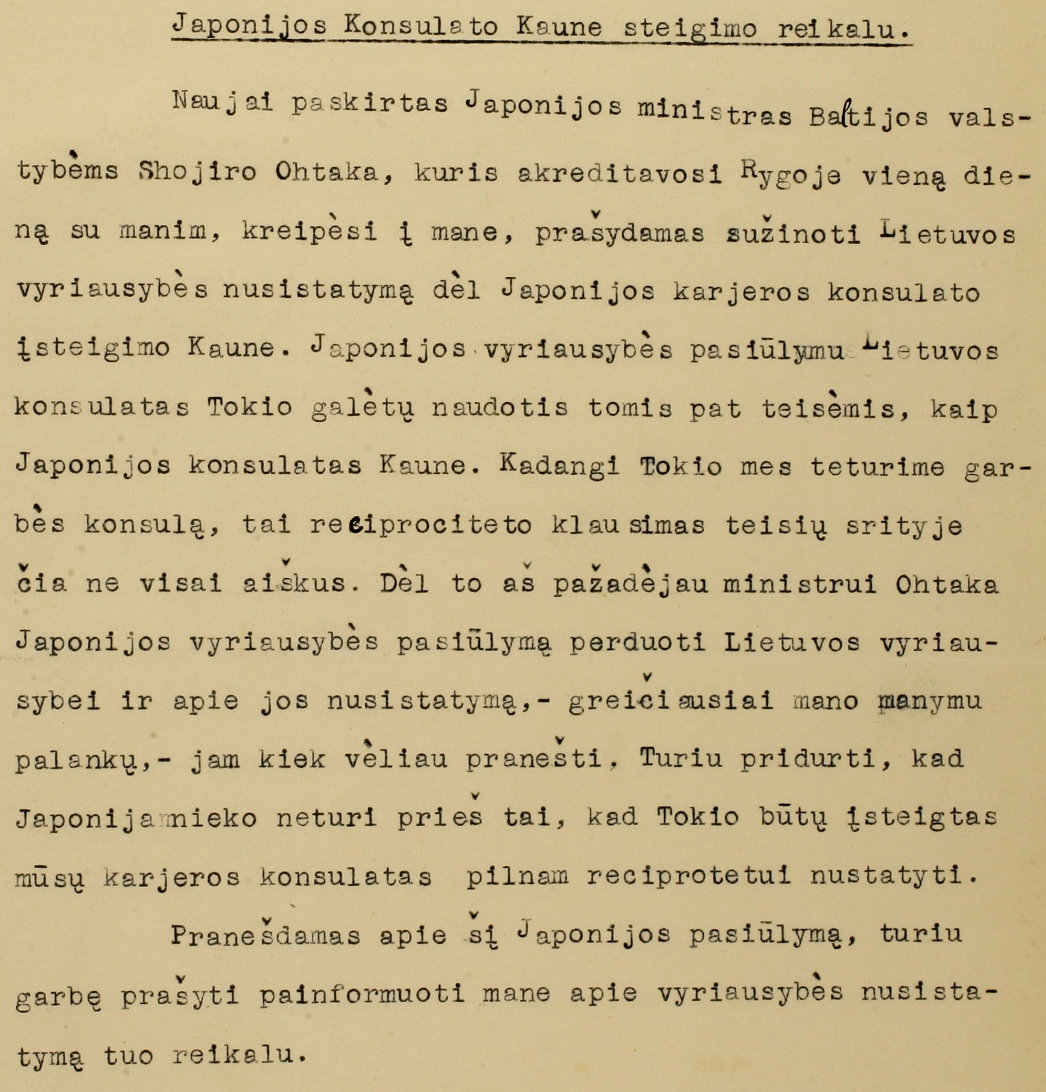 Masaji Yasaka was born on the 10th of May 1886 on the southern island of Kyushu, in a family of miners. After graduating from school, he expressed an interest in foreign countries and studied English, Russian, and Korean languages on his own. In 1904, served in the Japan-Russia war, later started working in trading companies. In 1919, he used all the gained experience to set up his own company, named after his family name – Yasaka Trading.

In 1935, a connection with Lithuania emerges as Masaji Yasaka was selected as Honorary Consul of Lithuania in Tokyo. 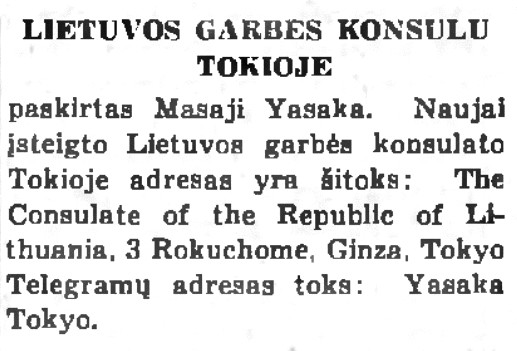 (fragment of a document sent to Lithuania by the Honorary Consul; Lithuanian Central State Archives)

Due to the insufficient data, it is not clear whether Yasaka was appointed Honorary Consul due to his former relations with Lithuania or merits to the country. The reasons were not specified in the documents approved by the Minister of Foreign Affairs. There is one presumption that Yasaka‘s trade relations with Russia might have been the base for the connection with Lithuania.

There‘s also a lack of information about Yasaka‘s measures to strengthen relations between Lithuania and Japan. Over the five-year term in this position, only some Yasaka's letters sent to Lithuania were found in the archives, mainly information about Japanese political news. Eventually, the honorary consulate was closed after the annexation of Lithuania in the summer of 1940. 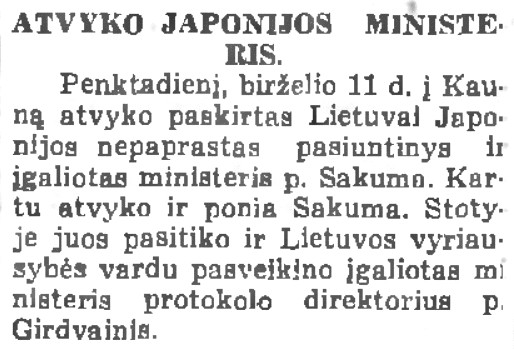 Senior Lithuanian and Japanese representatives visited each other occasionally, but there was no information about the visits of larger delegations. For example, a representative of the Ministry of Transport and Communications, Jonas Augustaitis, visited Tokyo in 1931 for official purposes and the former Minister of Agriculture Mykolas Krupavičius for tourist purposes in 1936. Meanwhile, the Japanese visits to Kaunas were almost limited to the representatives already residing in Europe, mainly military officials. 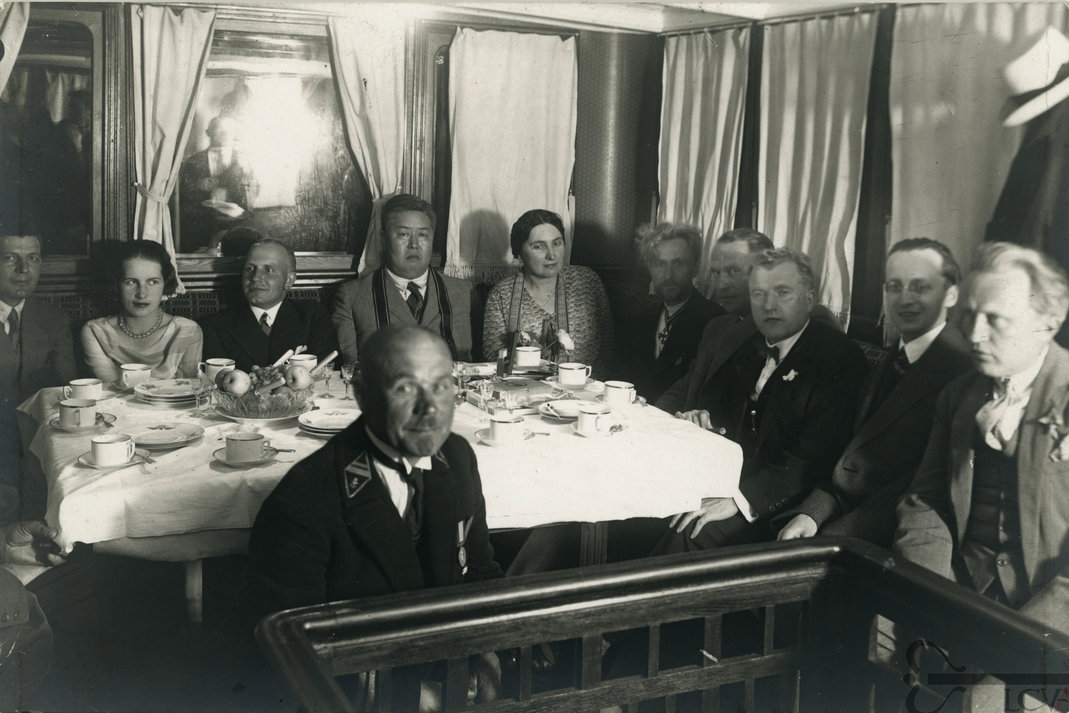 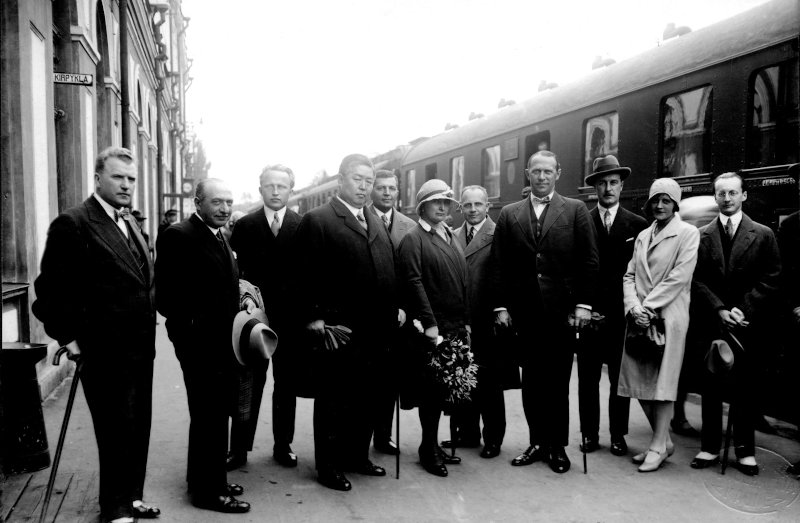