Mutual Interest under the Conditions of the Cold War

Relationships between Soviet Lithuania and Japan 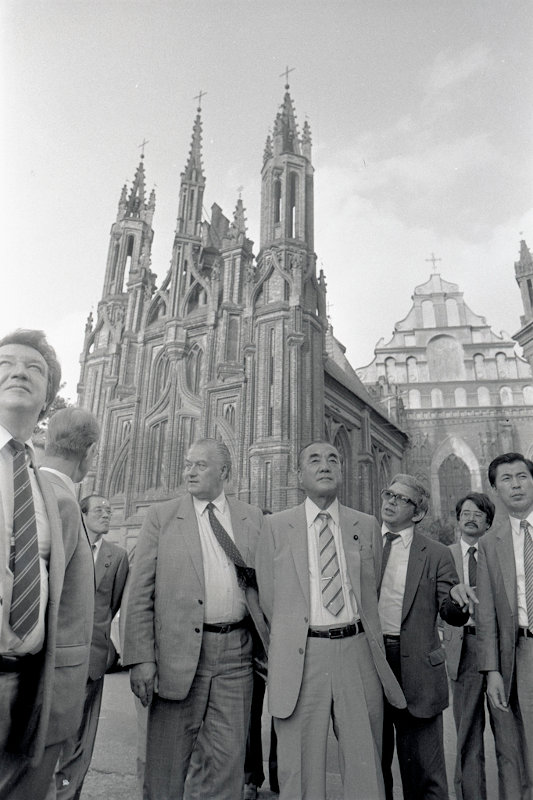 Lithuania was unable to develop independent foreign policy after the country was occupied by the Soviet Union; consequently, foreign consulates in Kaunas were closed, and international agreements were terminated. After Ch. Sugihara departed from Kaunas at the beginning of September 1940, there was no Japanese representative in Lithuania. As a result, the relationship between Lithuania within USSR and Japan developed very slowly. This should be not surprising because Japan was close to the USA during the Cold War, a “capitalist enemy on the opposite side".

On the other hand, during the Soviet period, we can track several episodes of rapprochement of Lithuania and Japan, and here is an attempt to raise awareness about them. Attention should be paid to the first summits, visits of Lithuanian and Japanese delegations, public and cultural exchanges, and in a broader context, an attempt of the Lithuanian diaspora to spread the news about independent Lithuania.

The first Lithuanian who shook hands with the Emperor

The first high-level summits between the Soviet Union and Japan took place in the 1960s and some included representatives from Lithuania. The relationship between Japan and the Soviet Union was developing at that time, and representatives from various republics of the Soviet Union were included in the delegations together with the members of the Communist Party from Moscow. Justas Paleckis, Chairman of the Presidium of the Supreme Soviet of the Lithuanian SSR, was the highest government official in Lithuania who went to Japan. He managed to visit Japan two times: in 1960 and 1969. 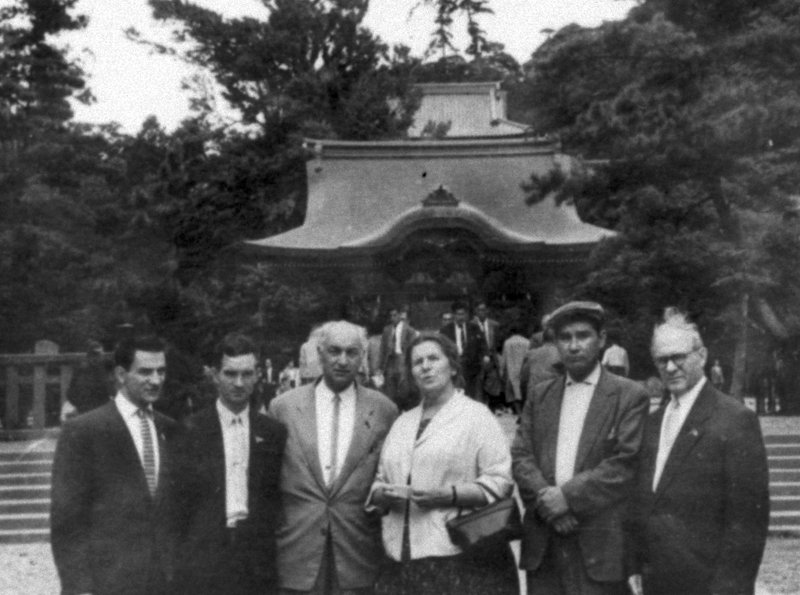 The first visit was related to J. Paleckis participating in the conference of the Inter-Parliamentary Union from 29th September to 7th October 1960, in Tokyo. Together with other participants, J. Paleckis visited the National Diet of Japan and participated in a reception at Tokyo Imperial Palace. Emperor Hirohito opened the reception with a greeting and welcomed all arrived guests with handshakes.

J. Paleckis spent several days in Tokyo and described his memories in books. In these books, he had presented the political, economic, and social situation and described tourist sites. His admiration and respect for Japan stood out, and in the last sentence, he expressed a wish for himself to come again to this country. 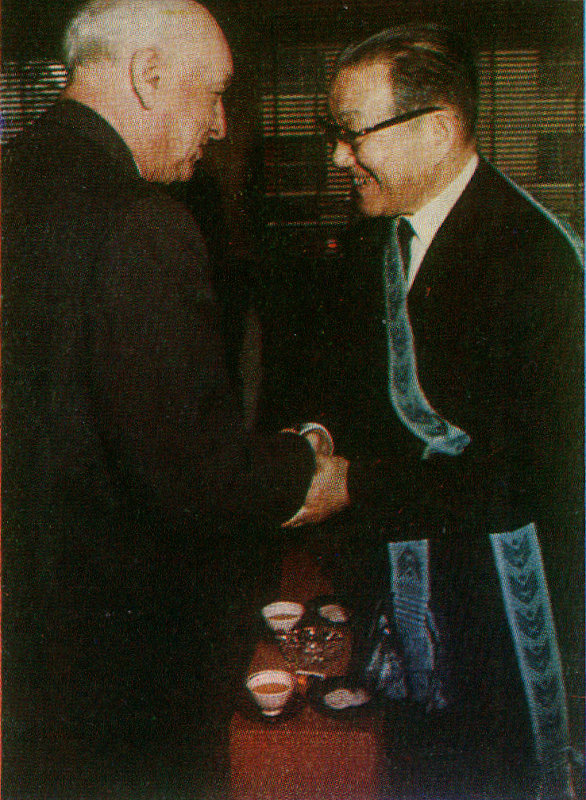 J. Paleckis visited Tokyo one more time from 15th to 24th April 1969 while representing the Soviet Union as Chairman of the Soviet Nationalities. He met the Prime Minister of Japan Eisaku Sato, Minister for Foreign Affairs Kiichi Aichi, Speakers of the Parliament, Governor of Tokyo. At the end of the visit, he again met Emperor Hirohito. They had a serious conversation about the international situation and relationships of Japan and the Soviet Union. It seems that J. Paleckis was the only Lithuanian communicating closely with the Emperor of Japan during the Soviet period. A meeting of a similar level took place again only in 1992 when the representatives of a much different generation – Vytautas Landsbergis and Emperor Akihito – met each other. 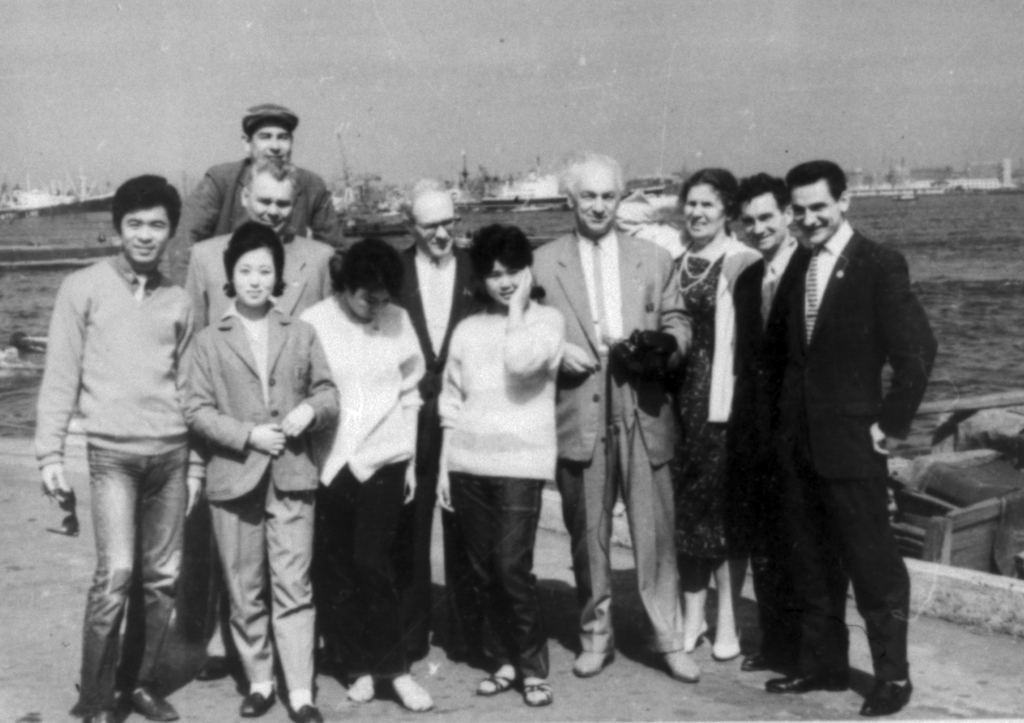 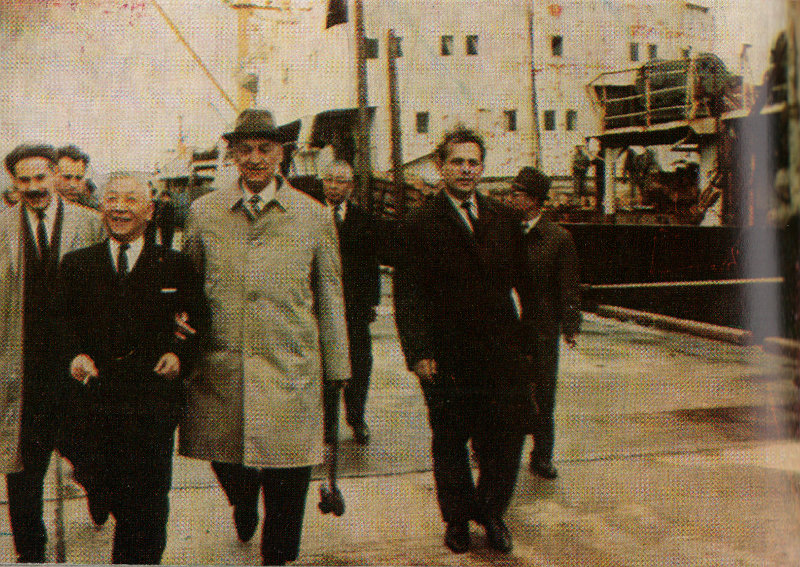 Relationships were developing based on mutual curiosity and admiration between Lithuania and Japan during the Soviet Union times. The more active communication between countries started in the second half of the 1960s when the situation in both countries was more settled and it became easier to get travel visas.

In most cases, Lithuanians visited Japan as members of groups of representatives of several Soviet nations; there were not many individual trips. Meanwhile, guests from Japan visited Lithuania as a part of a general tour around the Soviet Union. However, there were exceptions; for example, a visit by Ichiro Kato, the expert of Čiurlionis, who traveled specifically to Kaunas to see the original paintings of Čiurlionis.

The journalist and traveler Mykolas Liubeckis perhaps most clearly captured the mood of the early period. He visited Japan in 1959 and published richly illustrated with photographs book “Across the Yellow Sea” (lit. “Anapus geltonosios jūros”) in 1960. In the same year, writer Aleksandras Gudaitis-Guzevičius visited Tokyo and other cities in the spring. One year later, in 1961, works of Lithuanian folk artists were exhibited in World Nation Exhibition in Osaka. Of course, special attention received the Olympic Games in Tokyo because 16 Lithuanian athletes participated and sports journalists visiting Japan published detailed articles in 1964.

A lot of music exchange took place during this decade as well: the Japanese jazz band led by Seiichiro Kudo had a concert in Vilnius in 1963; in the middle of May 1965, group “The Movement of Singing Voices” visited Vilnius; on September 1967, the Japanese quartet “Royal Knights” had a concert in Lithuania. The latter band became famous in all USSR because they included Russian songs to their repertoire. 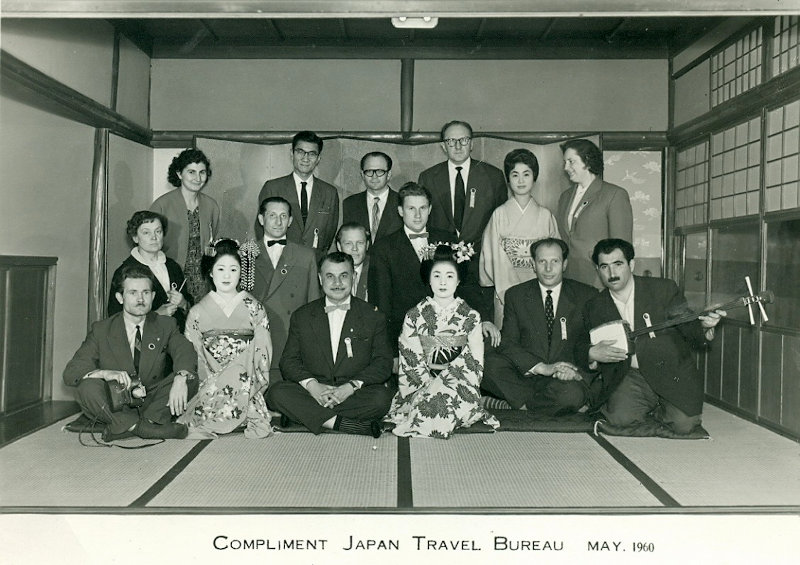 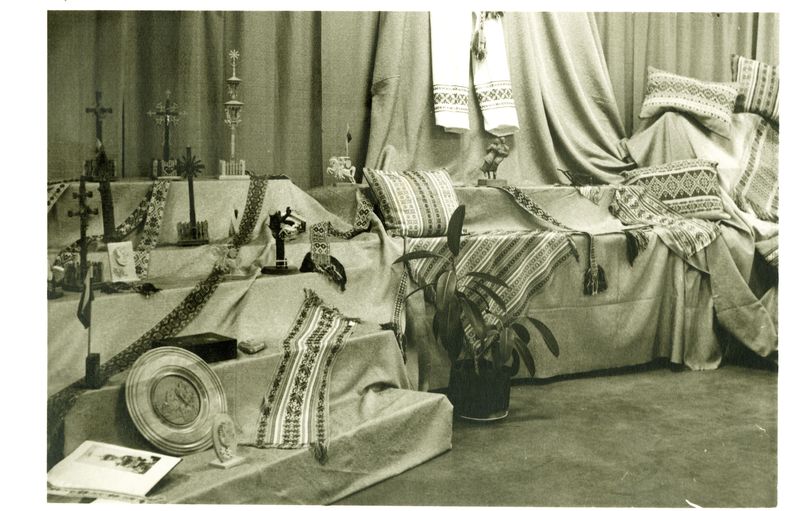 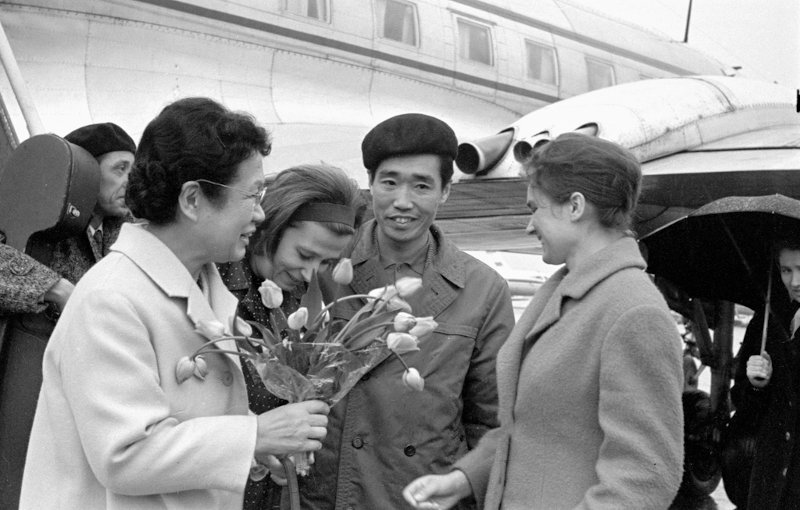 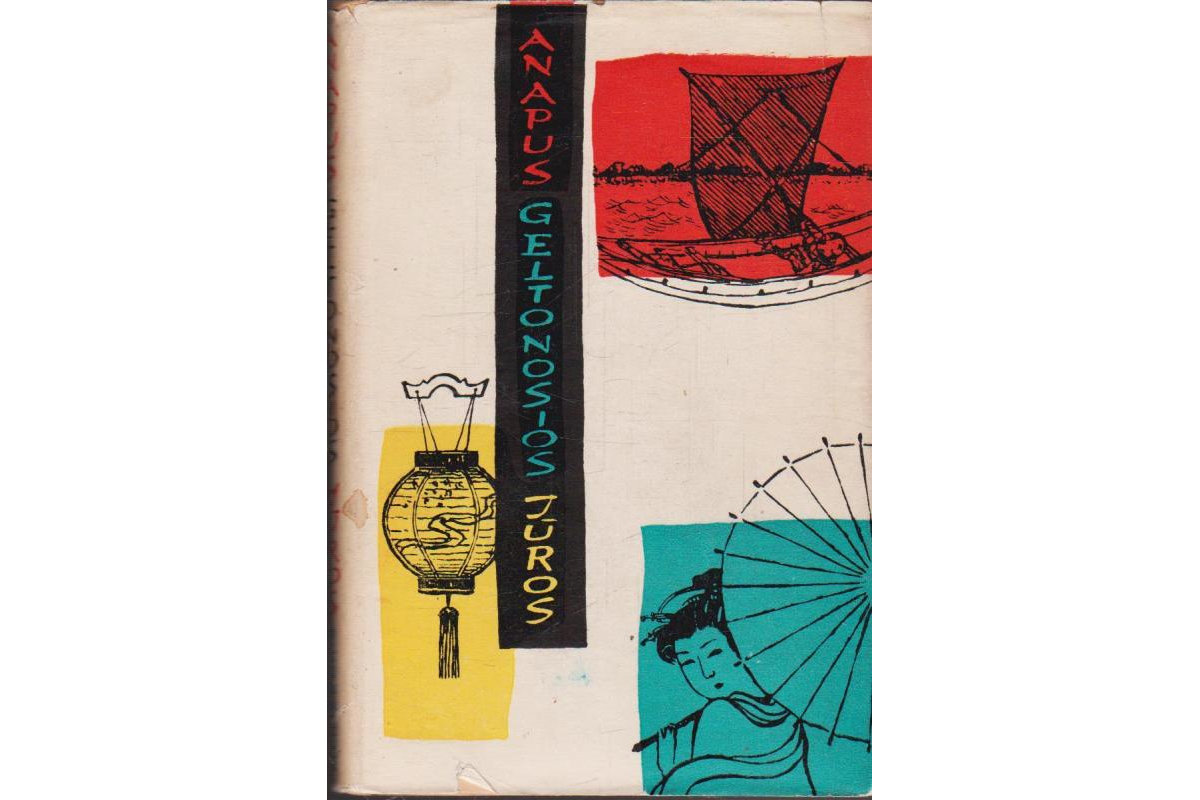 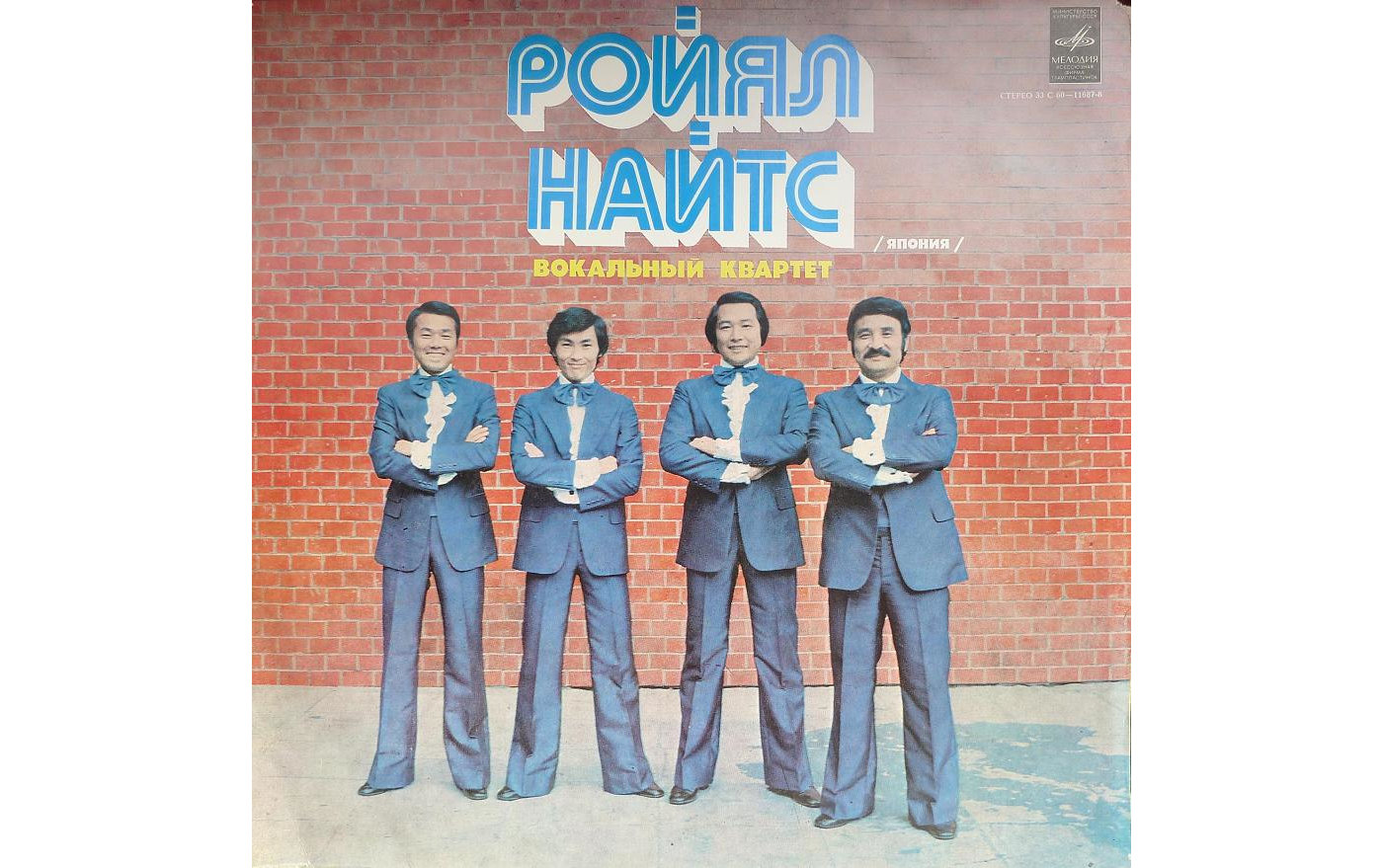 The 1970s started with the world exhibition EXPO-70 in Osaka. There Lithuania was represented by works of stained glass, architecture, and art. At a similar time, a group of enthusiasts interested in the world of Čiurlionis came together and organized a trip to Kaunas in 1974. In September 1975, the musical theater “The Girls from Takarazuka” played in Vilnius. 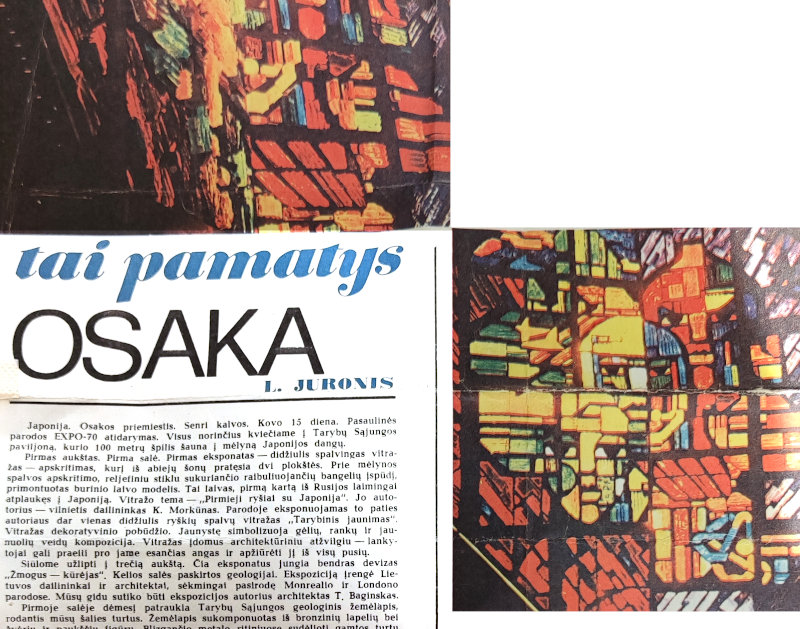 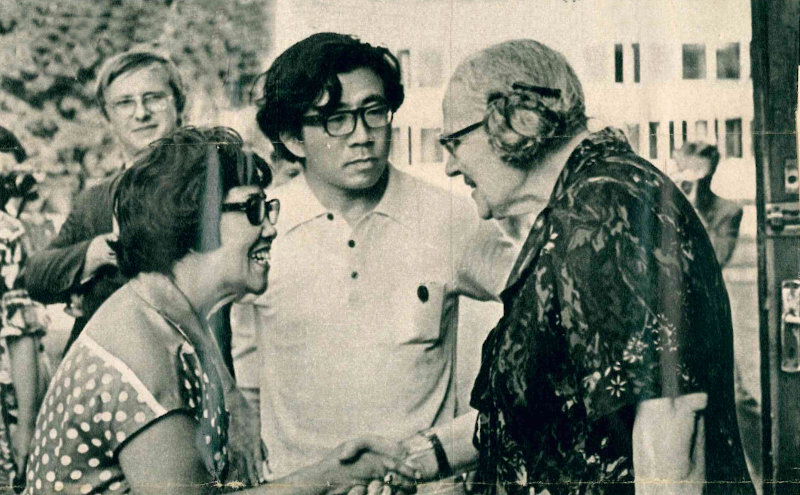 The last decade of Soviet occupation was also active. Lithuanian traditional art, modern graphics, and photography were presented in Days of the USSR in seven cities of Japan on September-November in 1982. Ensemble of traditional music “Lietuva” had a tour too. Similar events were repeated on 7-14 May 1989. In the same year, the Lithuanian fairy tale “The Swan. King’s Wife” (lit. “Gulbė karaliaus pati”) was published in Japanese, illustrated by Sigutė Valiuvienė. Around similar time, in September 1989, Lithuanian Chamber Orchestra organized eleven concerts in Tokyo, Osaka, Kyoto, Nagoya, and other cities. 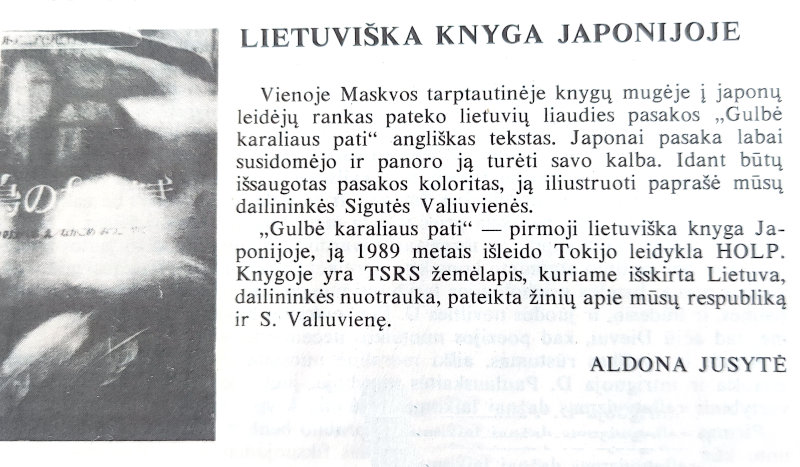 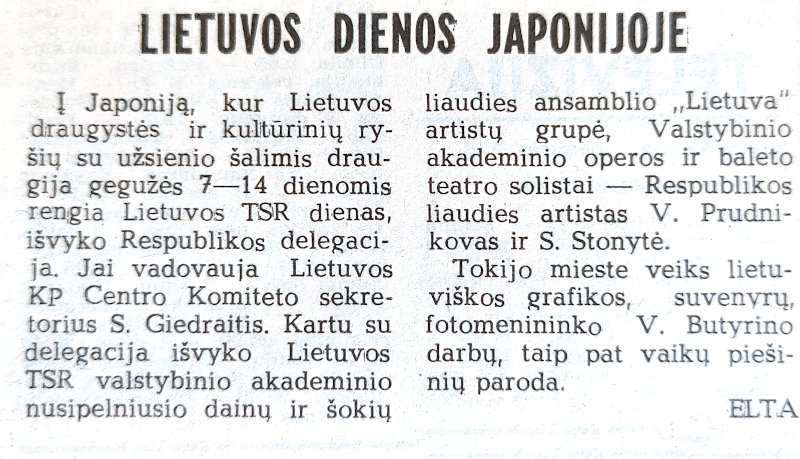 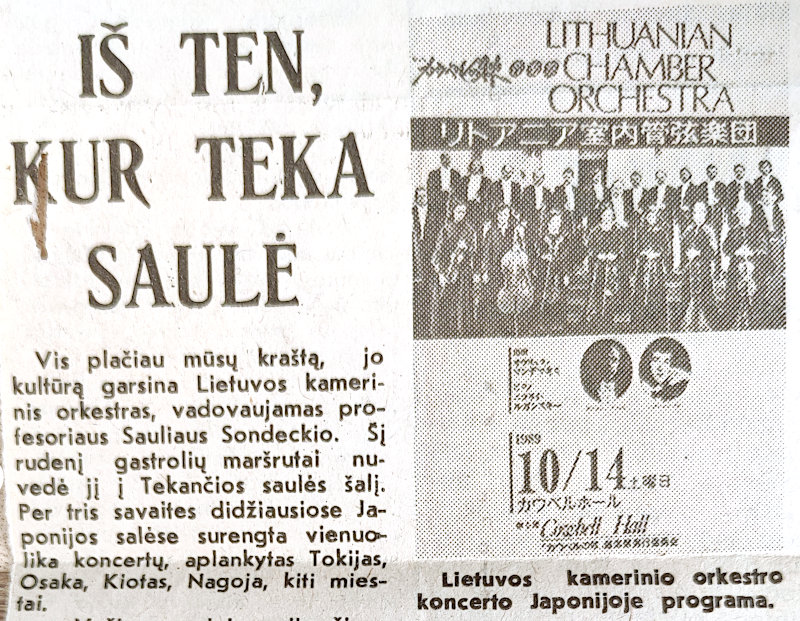 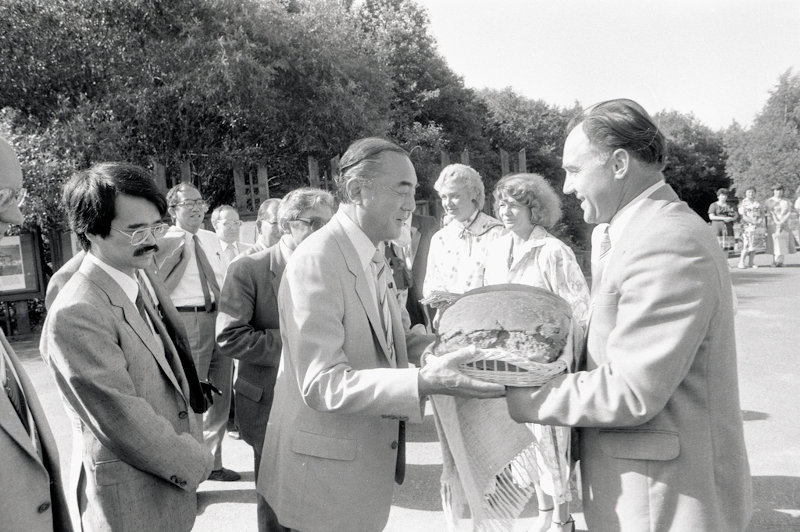 Lithuania received guests from Japan several times during the Soviet period. The majority of visits had a cultural intention, such as previously mentioned concerts, etc. However, there were also several larger delegations that visited Vilnius, Kaunas, and other cities. Among them it is worth to mention journalists who attempted to describe life in the Soviet Union and representatives of left-wing organizations.

During the Soviet period, the Japanese people could learn about Lithuania from sporadic articles in newspapers. For example, the name of Lithuania appeared in discussions about Ch. Sugihara in Kaunas (the first articles appeared in 1968) or about suicides as a political protest, which started by the self-immolation of Romas Kalanta and received a lot of international attention in 1972.

In most cases, the information was published by the Japanese journalists who resided in Moscow. However, there were delegations of correspondents, who came directly for a visit from Japan: for instance, the news agency “Nihon Denpa News” organized independent visits to Lithuania in 1970, 1979, and 1982.

Another major visit by journalists took place in October 1988 when the newspaper “Asahi Shimbun” sent its representatives to report about changes in Lithuania. Next year, “Nippon” television team made direct broadcasts to the audience in Japan from Vilnius by using the newest technological equipment. 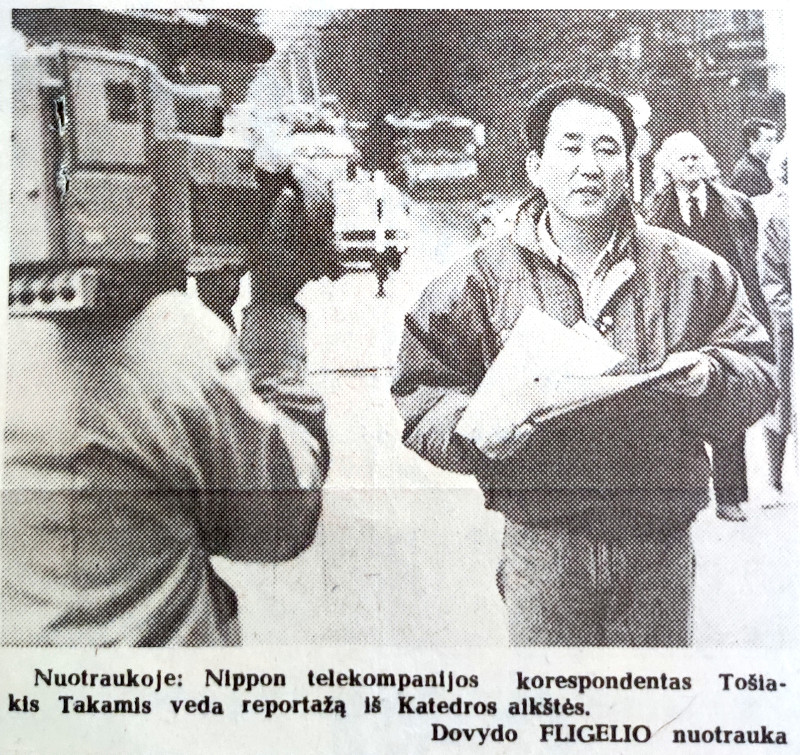 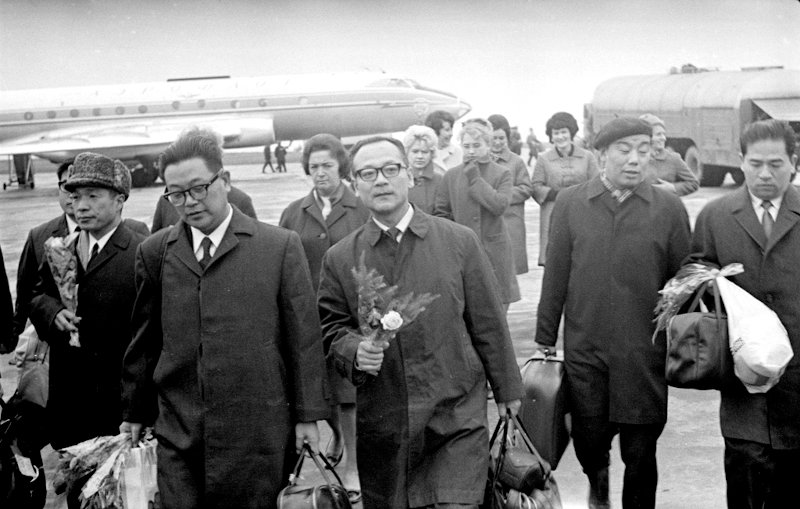 Trade unions were one of the first organizations developing contact with Lithuania. They arranged the first visits to Lithuania at the end of 1968. 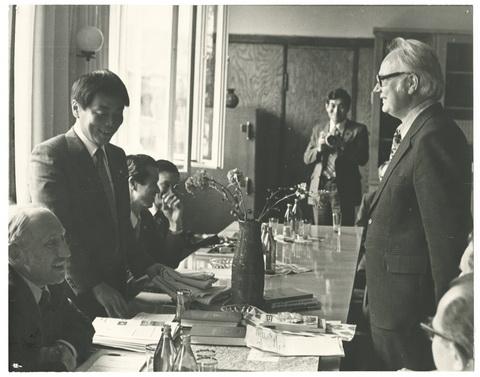 Representatives of the Japanese Socialist Party visited Lithuania more than once: in 1978, 1979, 1981, 1982, and 1986. The highest Lithuanian officers accepted guests and the Japanese delegations had a tour around various places. 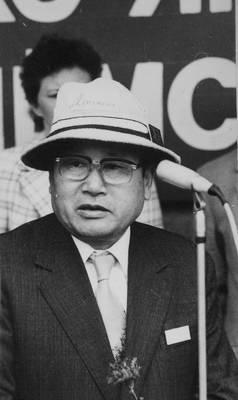 As far as it is known, Japan-USSR Friendship Association had not a separate group focusing on Lithuanian affairs. However, this union was helpful while meeting Lithuanian delegations visiting Japan and finding Russian-Japanese translators. The members of this union visited Lithuania in the summer of 1982 when Lithuania was preparing to represent the USSR in several events in Japan. The vice-president of the association and member of the House of the Representatives Toshiaki Yokoyama led the visit. One more visit took place in 1984.

(the Head of the Association Murakami in Vilnius, 1984; LCVA)

Ambassadors and ... the Prime Minister

Only two visits to Lithuania of Japanese diplomats occurred during this period: the visit of the Ambassador of Japan to the USSR Toru Nakagawa in November 1967 and the visit of the Consul General Sadao Katsumata in 1978. 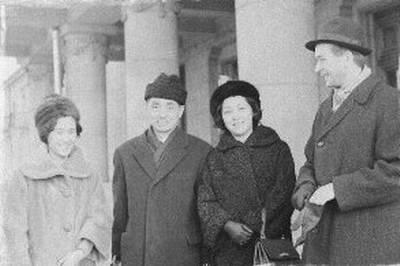 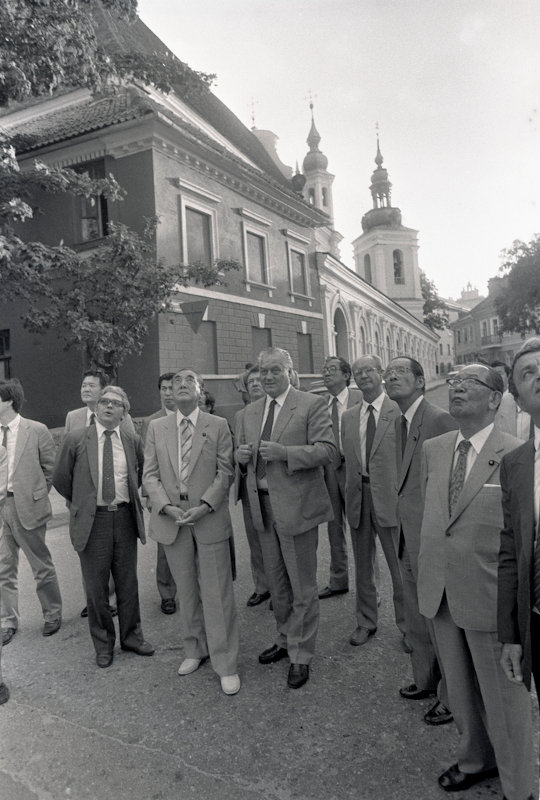 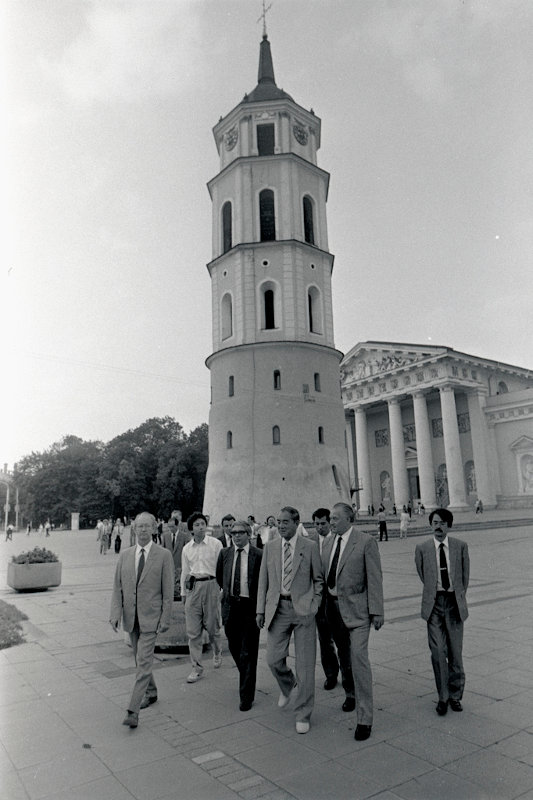 The visit of Yasuhiro Nakasone to the Soviet Union was firstly related to the issue of disputed areas. Y. Nakasone met Mikhail Gorbachev in Moscow and presented his arguments and suggestions. The other part of the visit was devoted to sightseeing, including a visit to Lithuania. The Prime Minister spent time in Vilnius, Kaunas, open-air museum in Rumšiškės and other locations. 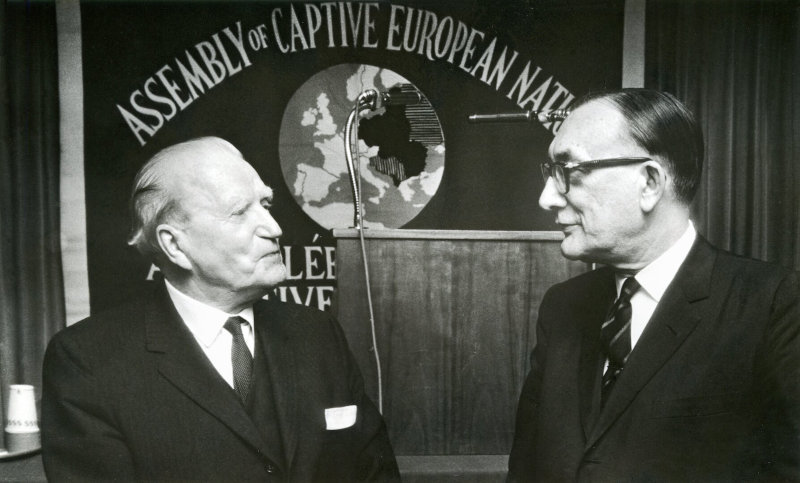 Despite the limitations, the Lithuanian diaspora developed relationships with Japan.

Famous interwar diplomat Vaclovas Sidzikauskas, who lived in the USA from 1950, spent several days in Japan in November 1966. He met radio and newspapers journalists, and during the interviews, he presented an aspiration for the independence of Lithuania. During the visit, V. Sidzikauskas met another Lithuanian “link” to Japan – Vytautas Meilas, who worked at the Embassy of Canada in Tokyo.

Also, there are more representatives of the Lithuanian diaspora who had connections with Japan: a journalist Antanas Laukaitis from Australia, writer Algirdas Gustaitis and the professor of Japanese studies Jurgis Saulius Elisonas at the Indiana University from the USA, engineer Kostas Astravas and journalist Liudas Stankevičius from Canada, etc.

Besides, some Lithuanians served in the US Army and spent more than one year on military bases in Japan. One of them was Bronius Michelevičius, who worked for the Central Intelligence Agency from 1967 to 1971 in Tokyo and collected information regarding the Soviet Union. 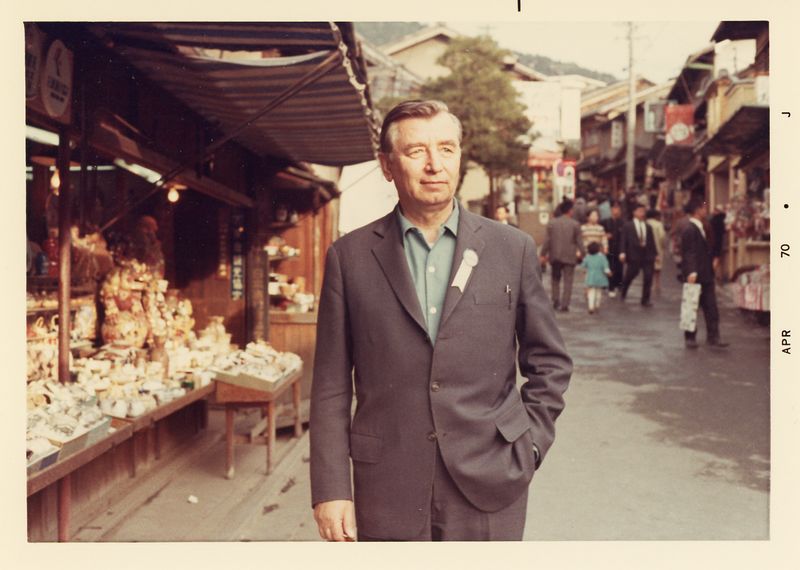 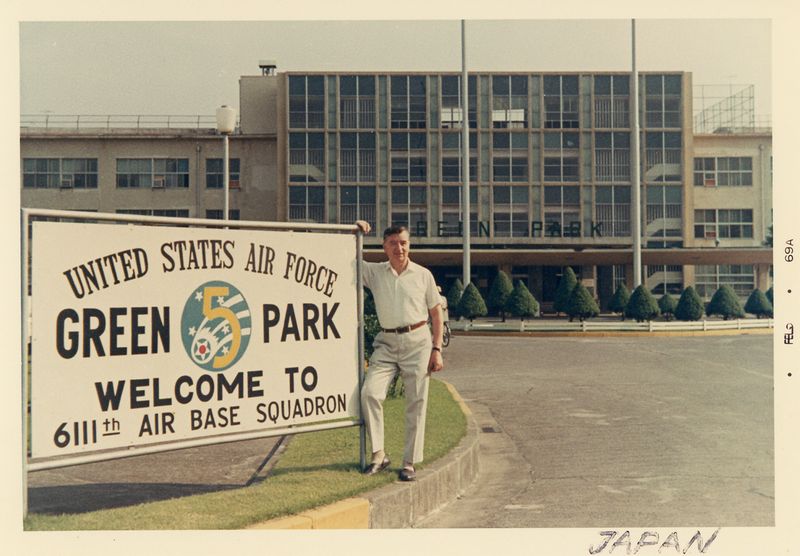 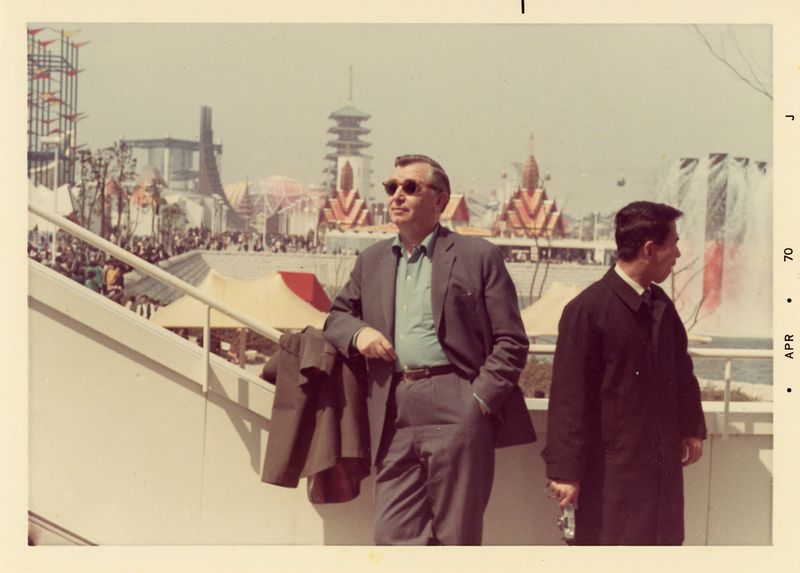 (B. Michelevičius in Japan; Vytautas the Great War Museum archive)